You are here: Home / Books To Read / SEX is nothing more than a game of tennis 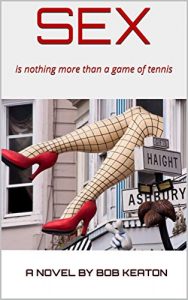 About SEX is nothing more than a game of tennis:

Sex, drugs and rock and roll. In the post hippie era, San Francisco emerged as a playground unlike any other place in the country for the adventurous and sexually liberated—gay, straight, and anywhere in between—before the dawn of herpes, HIV, and the emergence of the “religious right.”

In the late 1970s, it was estimated at one point a thousand men were arriving in San Francisco each week. This story follows the adventures and misadventures of three guys from the conservative South who were among those thousands who flocked to the City by the Bay, leaving everything behind, to start a new life.

Their story is packed with humor, but also poignancy, as they explore the city and themselves and their sexuality in their new environment. But most of all, it’s an entertaining, fun read. Join them on their adventure.

Andy is gay, but can he fit into the city’s more open and sometimes flamboyant gay scene? Will he ever find the life partner he so desperately wants?

Jon is a latent hippie, but can he be happy staying stoned and living in a shanty at the beach? Maybe not, after his old girlfriend from back East shows up.

Chris is searching for his sexual identity and a sense of belonging as he explores the city’s hot singles spots—gay and straight—and its sex clubs. What will he discover about himself?

A host of colorful supporting characters, men and women, straight and gay, many of whom live in the same apartment building, round out the cast.

Author Bio:
Back in college I dropped out of a creative writing course because the professor was so critical of my work. Instead, I had a successful career in journalism. I’ve covered entertainment and politics for newspapers and also worked for associations and corporations.

After early retirement, I wanted to go back and prove I could be successful at creative writing, too. I’ve written four novels, three of which have already been published.