You are here: Home / Books To Read / SEX is nothing more than a game of tennis by Bob Keaton 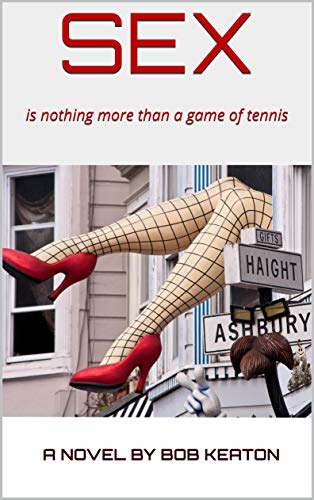 Sex, drugs and rock ’n roll. A novel about San Francisco in the 1970s. The city emerged as a playground, unlike any other place in the country, for the adventurous and sexually liberated—gay, straight, and anywhere in between—before the dawn of herpes, HIV, and the emergence of the “religious right.”

It was estimated at one point that a thousand newcomers were arriving in San Francisco each week. This story follows the adventures and misadventures of three guys from the conservative South who were among those thousands who flocked to the City by the Bay, leaving everything behind, to start a new life.

Their story is packed with humor, but also poignancy, as they explore the city and themselves and their sexuality in their permissive new environment.

But most of all, it’s an entertaining, fun read. Join them on their adventure.

Chris is searching for his sexual identity and a sense of belonging as he explores the city’s hot singles spots—straight and gay—and its sex clubs. What will he discover about himself?

Jon is a latent hippie, but can he be happy staying stoned and living in a shanty at the beach? Maybe not, after his old girlfriend from back East shows up.

Andy is gay, but can he fit into the city’s more open and sometimes flamboyant gay scene? Will he ever find the life partner he so desperately wants?

A host of colorful supporting characters, men and women, straight and gay, many of whom live in the same apartment building, round out the cast.

Buy the book, and follow the author on social media:
Get This LGBT Book From Amazon.

Author Bio:
“SEX is nothing more than a game of tennis” reflects the San Francisco I observed when I moved there from South Florida in the 1970s. It was my first novel, but one I always wanted to write, especially after reading and watching “Tales of the City.”

I’m originally from upstate South Carolina, but I don’t think that location influenced my writing as much as other places I’ve lived, including South Florida, the setting for my newest book, “Grayer than Grey”, and obviously San Francisco, where I lived for 12 years. I currently live in Atlanta where my second novel, “Our Last Shot, Family Business at Peckerwood,” takes place.

Where do I get ideas for my writing? When I’m exercising at the gym or in the shower. Maybe that gets the blood flowing to my brain? I need to work out an idea or scene in my head before I sit down at the computer.

Best advice I’ve ever been given? Trust your readers. Having worked as a reporter for three daily newspapers, I tended to provide all the facts, explain everything, leaving nothing to the reader’s imagination. Learning to back off and not reveal everything so quickly has been a challenge.

I also had to learn patience. Unlike writing an article for a newspaper or magazine, you’re not going to finish a novel in a day, or a week, or even next month. Writing a novel takes time, and often many rewrites. You keep coming up with new ideas and ways to improve. My first novel took four years.

I recently lost my chief editor, Bailey, a 17-year-old dachshund. Working without his input is difficult, but I’m slowly moving forward as I work on my fourth novel which should be out later this year.