You are here: Home / Books To Read / Setsuko & the Seven Samurai by V.M. Sawh 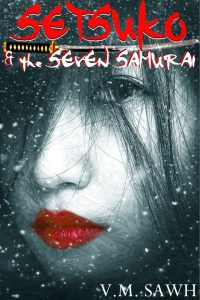 About Setsuko & the Seven Samurai by V.M. Sawh:

Good Tales For Bad Dreams invites you to take a journey back to 16th century Japan for a wicked interpretation of a classic fairy tale. This is the story of love, honour and revenge. This is your samurai Snow White.

Jealous of Setsuko’s beauty, the wicked geisha Izanami orchestrates the murder of her father, the daimyo of a mountaintop castle. After an assassination attempt leads to a coup, Setsuko suffers a catastrophic injury and is forced to flee the only place she’s ever called home and take refuge in the woods with a group of exiled samurai. Orphaned, abandoned, and disabled, Setsuko must learn the truth of what it means to be a samurai, if she ever hopes to reclaim her family’s honour and take her revenge.

Welcome to Good Tales For Bad Dreams, a short-fiction series of re-imagined fairy tales. Each story is set in a different time and place. Some will be familiar, others will not. So strip bare your assumptions, open your mind, and see these tales told like never before.

V.M. Sawh was born in South America and grew up in Toronto, Canada. He’s had pen and paper in his hand since he was 6 years old and his first trilogy of novels was completed at age 16. Despite the urging of his Writer’s Craft professor, he didn’t publish at the time. He’s spent the years between then and now honing his craft and engaging in all manner of geeky pursuits including assembling a ridiculous collection of graphic novels, anime and movies.

V.M. is a proud supporter of independent artists & authors. His “Good Tales For Bad Dreams” series of dark fairy tales is currently available on Amazon.