You are here: Home / Books To Read / Serving To Lead: Lessons in Adversity and Resilience from the Battlefield, Gridiron, and the Corporate World by Keith L. Craig 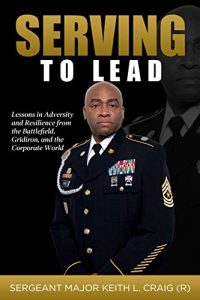 Serving To Lead: Lessons in Adversity and Resilience from the Battlefield, Gridiron, and the Corporate World by Keith L. Craig

Serving To Lead, is a brilliant ‘oeuvre’ and provides leadership lessons relevant for every profession. It delivers a compelling personal narrative
underpinned by tales of tenacity during adversity and resilience garnered from the battlefield, his time playing professional football, and the corporate world.

Buy the book, and follow the author on social media:
Get This Business Book From Amazon.

Author Bio:
Keith L. Craig[1] is an Entertainment Executive that is currently working in Burbank, California, at Walt Disney Studios managing Central Division theatrical sales and distribution for Walt Disney Studios Motion Pictures in 20 theatrical demographic market areas, primarily responsible for ensuring the prompt and timely delivery of film to exhibitors and the accurate execution of administrative and logistical oversight required to do so. Prior to his current engagements, Keith Craig served 32 years in the US Army, retiring as a Sergeant Major. His time in service took him around the world where he served in 6 combat campaigns, conducted humanitarian and natural disaster operations, played professional football and oversaw the creation of senior enlisted training programs.In addition to his primary duties at Disney, Craig is President of the company’s Diversity Resource Group SALUTE, charged with supporting military veterans employed by the studio, helping them integrate, strengthen and grow their careers and provide a sense of community within the organization.Sergeant Major Craig retired after serving his twilight tour as the 12th Senior Enlisted Advisor to the Commander and The Exchange CEO, of the Army & Air Force Exchange Service, AAFES, for Europe and South West Asia Region.