You are here: Home / Books To Read / Seduced by His Song by Abby Gordon 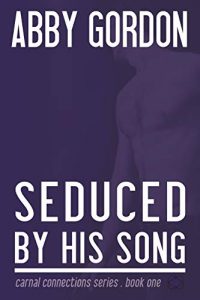 Seduced by His Song by Abby Gordon

A one-night stand between the world’s hottest singer/actor and a London bartender becomes public fodder when he brags about it on a morning radio program. Fired from the Lincoln Hotel, hounded by the tabloids, Jessica Munroe holes up in her flat, haunted by memories. In his private Caribbean island studio, Sean Livingston pours out his heart into the lyrics. Finally discovering what’s been happening to Jessica, Sean focuses on one thing – making her his for more than one night and sets out to rescue her and introduce her to his life. But the secrets of the past won’t stay hidden and Jessica knows that hers could take Sean from her just as she falls in love with him. To keep the perfect woman at his side, Sean will have to pull out all the stops and everything in him to seduce her one last time.

Buy the book, and follow the author on social media:
Get This Romance Book From Amazon.

Author Bio:
I’ve two series in the works. The Order of the Rose is historical romance about a secret society that stands against an ancient enemy that wants control of church and state, thought and deed. Beginning in the reign of Elizabeth Tudor with The Hidden Rose, the next six stories are outlined and will take you through Europe as the Roses love and fight their way to survive. Love in the Shadows, erotic romance, is about members of the Shadows Club – men and women who learn to express all the ways of love. This series takes my first several books, and many others, organizing and rebooting into a cohesive collection. The First Connection is available as a free novella and the next two – The Submissive’s Touch (previously The Master’s Choice) and Fall of Adonis are complete, with the next two frantic to be written.