You are here: Home / Resources / Sacrificial Weapon by Michael Anderle 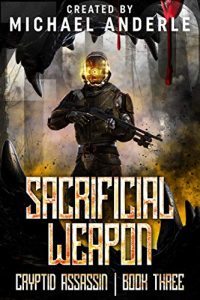 “Do you think he doesn’t care about the hours he’s putting in?” Vickie asked.

“I get it,” Bobby responded, clearly annoyed. “And I’m not saying Taylor doesn’t care about the work. I’m only saying that…well, it’s not like him to be late.”

Vickie shrugged and returned to her work. “The chances are he went to that breakfast place the two of you love so much.”

“It’s called Il Fornaio, and it’s not only a breakfast place,” the mechanic replied and resumed his task. “Actually, the fact that they serve breakfast is incidental. They’re an Italian place, so they serve Italian food for all three meals of the day. And a couple more meals too if you’re a hobbit.”

“You’re Korean, though, so why don’t you go more for the Asian food?”

“I’m Chinese-American, thank you very much,” Bobby said. “And it’s not a trait that defines who I am or what I eat. I happen to like me some authentic Italian food, so there.”

“Sorry, I didn’t mean to offend you.” She sounded genuine in her apology. “Still, your guys’ obsession with that place is a little unhealthy, both for your bodies and your minds.”

“Hey, don’t knock it until you try it,” he snapped. “Head on over there for the breakfast special and you’ll see what all the fuss is about.”

Vickie raised an eyebrow. “Breakfast special, huh? Is that what you older guys call Netflix and Chill?”

Bungees turned away from his work again and looked at her with his eyes narrowed and a confused expression on his face.

“Oh, come on,” Vickie said, exasperated. “Don’t tell me you don’t know what Netflix and Chill is code for. It’s been around since before I was born. People have used it for decades.”

“Not where I come from,” the heavyset mechanic told.

Taylor and the rest of the crew are back. It’s time to kill some Cryptids, and explain life and how it works to each other.

So long as that discussion is not between Taylor and Special Agent Banks.

The Cryptids have started to kill a large amount of humans in the upper mid-west. Banks’ bosses told her not to call in the Cryptid Assassin…

Now, the showdown between Taylor and the creatures will stop when one or the other is dead… And it isn’t looking good for Taylor.

Author Bio:
Michael Anderle (ok, weird talking about myself in the 3rd person) (1967-Hopefully a long time from NOW) was born in Houston, Tx. A very curious child, he got into trouble – a lot. What to do with an inquisitive mind when he was grounded? Read!

Ok, done with all of that 3rd person stuff.

In the first 20 years, I mostly read Science Fiction and Fantasy. In the last 10 years I have enjoyed Urban Fantasy and Military Fiction. With this background, I’ve been blessed with creating The Kurtherian Gambit series, a well-selling, and fan loved, collection of stories.

The fans have propelled these stories beyond my wildest imagination and they should get all of the credit for sharing with friends, family and occasionally the random person on the street. They are fantastic!