You are here: Home / Books To Read / Running Back in Time: Discovering the Formula to Beat the Aging Process and Get Younger by Dr. Zeev Gilkis 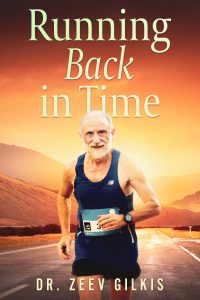 Running Back in Time: Discovering the Formula to Beat the Aging Process and Get Younger by Dr. Zeev Gilkis

Dr. Zeev Gilkis decided to give himself an unusual present for his 70th birthday – running a full Marathon. Perhaps this wouldn’t have been so unusual, had he been a physically active in his younger years. But Zeev is a cancer survivor & began his career in sports in his sixties.
Join Zeev in this adventure and discover that age doesn’t matter & you too can achieve anything you dream of.

Buy the book, and follow the author on social media:
Learn more about the writer. Visit the Author’s Website.
Get This Non Fiction Book From Amazon.

Author Bio:
Zeev Gilkis, PhD, was the founder of AMIT, an institute for bio-medical development at Technion. For more than eight years he was the CEO of the institute and led the establishment of five start-ups in various fields of medicine, serving as the chairman of the Board of Directors of all five.
For over 11 years he held senior management positions at Comverse Technology which was at that time a S&P 500 company.
He earned his PhD with a thesis on Artificial Intelligence, and in addition, holds graduate degrees in mathematics, statistics and computer science and a Master of Science in mathematics.

Gilkis served in the mythological 8200 SIGINT Unit of Israeli Intelligence for 17 years, and was awarded the highest “Award for Israeli National Security” by the President of Israel.

He served as the first Israeli military attaché to Poland and Hungary. In addition to his diversified career, he has devoted most of his free time to neuro-science, health and nutrition.
After retiring he began a new “career” in sport activities: competing in triathlons, half-marathons and surfing.
He is the author of the books: Unlock Bliss, a memoir of getting happier, The Secret of Life, a memoir of getting younger and Running Back in Time.
He is a vegan, and practices yoga and meditation.