You are here: Home / Books To Read / Run Cassie Run 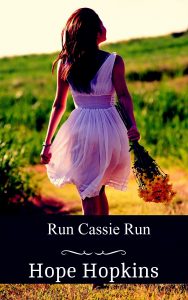 Cassie Walker at the age of 16 was captured and forced into sex trafficking for eight years by the man she thought loved her. Peter Doyle a Wolf in sheep’s clothing appeared to be her knight in shining armor but he deceived her making her fall in love with him then he imprisoned her into his sex trafficking business.

In the grueling eight years of her life stolen from her Cassie can’t handle the abuse, rape and drugs they forced her to take any longer. All she wants to do is end her life, it’s the only answer, the only solution…

Author Bio:
Hope Hopkins is a home-school graduate, earning her high school diploma from Penn Forster High School. She also has an Associates in Business Administration from the University of Phoenix and studied psychology. Hope is a writer, Instructional Designer/Videographer, artist, musician and music producer.

In the year 2006 Hope started writing, at first her stories began in drawings, than she started to write short stories, for the longest time she only wrote endings to her stories. Hope started writing after she watched the movie One Night with the King with her mother. She continued to write, but stopped after awhile. In 2009 she picked up writing again never thinking about publishing, she was just writing for the fun of it. Than as more time passed she found Twilight by Stephenie Meyer one Christmas when she was shopping with her mother. Hope was already a fan of vampire stories so she read Twilight and loved it. She read the whole Twilight series and was further inspired to write more.

Currently Hope has released Demon Hunter Lost Memories. Eden’s Secrets, The House of Murder, Run Cassie Run and other ebooks will be out soon. All Hope’s books are available on smashwords, amazon, barns and noble, iBooks, and Kobo. Soon Hope will have her first music album out. ​