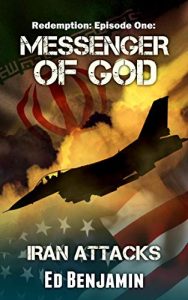 About Redemption: Episode One: Messenger of God: Iran Attacks By: Ed Benjamin:

Harry goes from an ORPHANED teen to an Air Force “TOP GUN” fighter pilot. On combat patrol on the Iraq/Iran border, Harry and his wing man are ambushed and attacked by #Iranian fighter planes. He faces overwhelming odds, but the Iranians underestimated him. After the action, Harry is a hero, but the Air Force assigns him to a fate he feels is “worse than death! Will Harry be BROKEN? ”

Author Bio:
Ed Benjamin retired from the United States Air Force in 1990 where he served as an aircraft maintenance supervisor.

He also writes short stories and novellas; some of which he offers for sale via digital download. He is currently working on a full length novel featuring Harry Miles.

Ed and his spouse live in Bulverde, Texas – also known as the “front porch” of the Texas hill country.