You are here: Home / Books To Read / Raven’s Shade 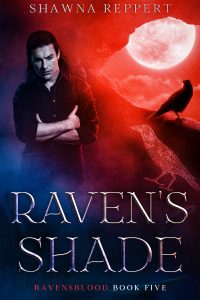 A simple favor for a friend becomes a deadly challenge as Raven faces the highest stakes of his life.
A young man stands accused of committing a horrible crime using forbidden dark magic.
When reformed dark mage Corwyn Ravenscroft heads to the small, rural town of Devil’s Crossing to launch an unofficial investigation, he soon discovers the simple case is more complex–and more dangerous–than he expected.
Far from home, Raven is out of his element and out of his area of expertise, but that’s the least of his worries as more deaths pile up and a mysterious ancient force returns to threaten all life on earth. To stop it, Raven might have to sacrifice more than his life.

Author Bio:
Shawna Reppert, an award-winning author of fantasy and steampunk, is proud of keeping readers up all night and making them miss work deadlines. Her fiction asks questions for which there are no easy answers, while at the same time taking the reader on a fine adventure that grips them heart and soul and keeps them turning pages until the very end.

Her debut novel, The Stolen Luck, won a silver medal for original-world fantasy in the Global Ebook Awards and an Eppie for fantasy romance. The first three books of her Ravensblood urban fantasy series won gold medals for contemporary fantasy in the Global Ebook Awards. Other of her works have won silver medals in the categories of historical fantasy and fantasy romance.
Shawna’s love of live Irish music and dance frequently influences her work. Her four-footed children are a Lipizzan horse and a black-and-orange cat named Samhain who occasionally takes over her blog. Shawna also likes to play with the Society for Creative Anachronism, and in the past has been found in medieval garb on a caparisoned horse, throwing javelins into innocent hay bales that never did anything to her. More recently, she has been known to attend Victorian teas in her steampunk regalia.

She grew up in Pennsylvania, and now lives in the beautiful wine country of Oregon. Each has colored her writing in different ways.