You are here: Home / Books To Read / Raven – The Triballi Incident by Stephen E J Tomporowski 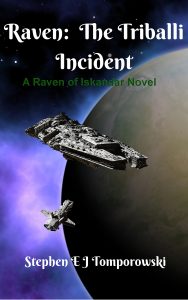 The Tournament is going Alliance wide! Deathmatch and Assault are the stadium events of the future, in simulation, for every planet of the Alliance. Now Central, the planet of the Top Tier competition, is expanding the very best to every planet. All good players head to Central for the money and now the Tournament Committee is sending the 2243 Champions, Iskandar Prime, on a promotional tour of major and minor colony planets even visiting Earth itself! After adventures including bananas on the royalty-rich planet of Mirabelle described in ‘Raven: Mirabelle’, the Iskandar tour visits AC3, the planet of infinite advertisements and lawyers; Earth, now a sparsely settled planet of museums and nature preserves; Orestes, Ancient Greece reborn and then Triballi where everything explodes. The team encounters not just inept local Tournament teams, but thieves, cheats, crime bosses, politicians and mythical elves. All the while, the team members keep their heads and wits about them even if it means flinging somebody into farm equipment.
Raven joined Iskandar Prime as a walk-on in ‘Raven: The Call from Central’. From the moment the Necris walked onto the field, Iskandar Prime turned into a juggernaut, plowing through the competition winning every match for six months, the only team in Tournament history to sweep the playoffs.
Join Iskandar Prime, the most diverse team ever, with Soria, the elf captain, squidiform Skylla, angeliform Calamity Angel, tournament legend Grabby and triple digit scorer, Raven, the Necris, Zinaida, Lara, Gothgirl, Dahija and Chaoschick, as they battle enemies both on the field and off.

Author Bio:
Biography: I was born in the middle of last century (1952) and probably better known for being an Electronics Design Engineer and Electronic Music composer (Syemak) than an author. So I grew up in the ‘Golden Age’ of Sci-Fi when Isaac Asimov was still very active and the stories involved normal people involved with wonders. Sci-Fi would eventually be involved with deeper characterization but would go overboard with every character a candidate for the looney bin and magazines only buying stories that involved gay characters with serious mental issues who became warped heroes.
Rather than stay with the current fashion of dystopian visions, I tried to envision the planetary expanse of mankind as an outgrowth of our current society. Not the headlines, but the typical people you see on the street who are journeying through life without pretensions of grandeur. Although we have had many technological advancements since the 50’s, people have not really changed. They still watch sports, go to the store and drink bottled liquids. Although the clothes might be marginally different from the 50’s, the person inside is still the same with the same needs, wants and opinions. And believe me, marketing will always be there. So will the pretensions like Lara’s exclamation of ‘getting a headache’ when watching 2d movies.
Boy, that was pompous, huh?
And I was supposed to be talking about me. Here I am, still working as a design engineer, having spent 27 years in medical electronics, 10 years in precision measurement and now bearing down on 10 years in designing military equipment. I walk five miles a day, am slightly overweight and am going bald. I’ve worked for companies that Scott Adams has described in the most part, but would still have plenty of material for him for many years.
Now I’m writing something that isn’t test plans or theories of operations. Wow.
The Raven of Iskandar series is sketched out to encompass at least four books. The universe that is described within was imagined long before I ever met Raven, so there is at least one storyline outside of Iskandar that is begging to be done. I snuck a reference to that story in one of the scenes. Maybe you’ll notice it.
My editor, Yvonne Marrs, is a unique and heroic character in her own right, but it was her expertise and constant encouragement that is truly prized. When I mentioned I was writing this story for myself, she asked to see it. After I sent her what you read as chapter 1, she asked for more. After every section was the same request for more. If you get that from your editor, that’s a good thing.
In conclusion, I plan to live to 120. While I might not live longer than Jack Vance, I hope to be writing longer.
God Bless.
P.S. – Oh, you wanted to know more about the Electronic Music? Just dart on over to Soundcloud and search for Syemak. There are two pieces that relate to the book: Call from Central and Raven’s Walk.