You are here: Home / Books To Read / Ranh by Ian J Miller 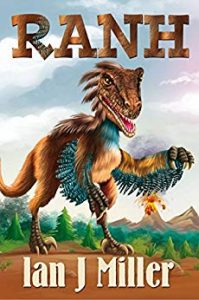 Natasha Kotchetkova leads a small delegation to Ranh to sign a peace treaty between Ranh and Earth. Ranh is a planet that was seeded with Cretaceous life from Earth and has evolved a technologically advanced race of raptors, many of whom feel the place for mammals is the larder. On arrival, she is stalled and finds the major civilization is in a state of internal turmoil, not helped by a Cardinal having heard the word of God directs him to remove mammals from the Planet of Creation (Earth). While a treaty with other advanced civilizations previously forbade any intervention on Earth, that treaty has expired. The delegation assumed they would have allies in the Kuyrills, but they are in disarray, while Seppet Methrell of the Military Curia, perhaps the most dangerous female on Ranh, has put Kuyrill Kazyn on the run. Kazyn’s only ally was Baht, unacknowledged, the lowest of the low, who was forbidden to hurt a fly or stand up for herself, yet she must do what no other unacknowledged has ever done or there will be interplanetary war.

While the fifth in a series, it is intended as stand-alone as long as it is recognised the characters have history. A tale of plotting, conspiracy, religious fervour, murder, treachery, honour, diplomacy, and tail-ball. Discounted to 99c/99p from Sept 19-26

Buy the book, and follow the author on social media:
Learn more about the writer. Visit the Author’s Website.
Get This Science Fiction Book From Amazon.

Author Bio:
Ian J Miller was born in 1942 at Hokitika (New Zealand) and received degrees (BSc Hons1, PhD) from the University of Canterbury, New Zealand. He became Head of Applied Chemistry at Chemistry Division, DSIR (NZ) before leaving to set up his own chemical research company. His involvement in ventures to make pyromellitates (for heat resistant plastics) and seaweeds led to his becoming a Director of two ICI joint venture companies. He has also self-published two sets of ebooks, together with 100 peer-reviewed scientific papers. His scientific work has involved seaweed polysaccharides, liquefaction of biomass, photochemistry, as well as theory. His work on scientific theory has led to two ebooks entitled “Elements of Theory”, which shows how to form scientific theories by using the methodology known as induction. The author is now semi-retired, he lives in Lower Hutt, New Zealand, and is mainly working on completing a series of science fiction/thriller novels involving a futuristic history.

The author’s experience with negotiations with politicians, business leaders and financiers has been used to give authenticity to those aspects of the plots, while his experience during the 1968 invasion of Czechoslovakia, including the smuggling of a petition out of the Iron Curtain, has helped with the thriller aspect. He has also had a life-long fascination with theories in the physical sciences, and his work on planetary science has been used to provide realistic backgrounds, particularly for the novels involving Mars, and to provide illustrations of how science works.