You are here: Home / Books To Read / Queen Of Diamonds, Mafia Madame Book 2 by Alexa Spagnoli 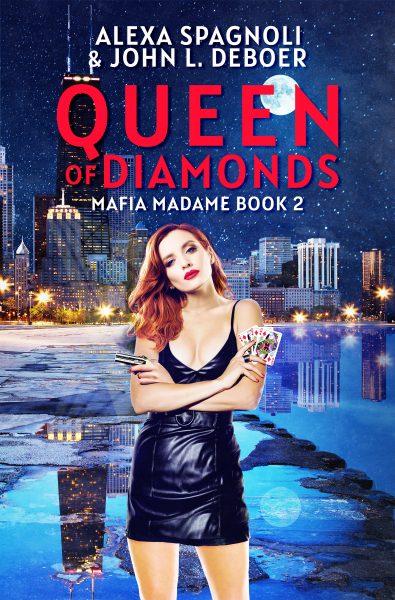 2004 – Chicago gangster Nick Nicoletti was dying of heart failure. Who could he trust to help him keep control of his criminal enterprises before it was too late? Who had the cold-blooded killer instinct and cunning required to do what his businesses required and would accept the mantle he had to bestow when his time came? No man in Chicago could fill his shoes, as far as he was concerned. But he knew a woman who could.

It had been twenty years since Cyn Hardy had breezed into Las Vegas from small-town Michigan, a wide-eyed eighteen-year-old innocent looking for excitement in her life. During that time she married the son of mobster Joe Spagnoli, became the owner of the largest call-girl service in Sin City, and survived the murders of her husband, then her father-in-law, and finally her twenty-year-old son. As she was immersed in grief, her father-in-law’s closest friend, Nick, sent for her. Cyn had something no one in Chicago had – Nick’s complete trust. And she owed Nick big time.

So Cyn Spagnoli was back in the Mafia again, learning Nick’s gambling and loan-sharking businesses and his specialty – assassination, tapped to become his successor.

Author Bio:
Alexa Spagnoli was born in a small town in Michigan and grew up in a private beach community on the shoes of Lake Erie. At the age of 18 she went to Las Vegas and decided to stay, moving in with a Chicago mob associate, and began a whirlwind of a life. Her skills allowed her to become, a bookie, a model, an Outcall service owner and finally, owner of an Event Planning company.
Through the decades, Vegas morphed from sophisticated adult amusements, to family-friendly in the Eighties and early Nineties, to “What happens in Vegas, stays in Vegas” in the 2000s, Alexa morphed along with it, finding opportunities to flourish. As Vegas became the biggest tourist attraction in the US, the money and opportunities got bigger. As the Mafia was run out of town by the Nevada Gaming Commission, she transitioned to Event Planning, utilizing her contacts to become a legitimate success in convention-rife Las Vegas.

In her debut novel Mafia Madame, she chronicles a truly unique Las Vegas story. Her real-life experiences color her gripping prose, lending authenticity and richness to her storytelling. Alexa refers to Mafia Madame as her almost-memoir, because she lived nearly everything in the novel. In her spare time Alexa enjoys reading, hiking, cooking and fine wine.