You are here: Home / Books To Read / Poetic Therapy by Greg Ware 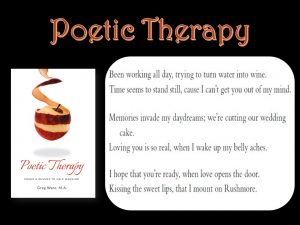 About Poetic Therapy by Greg Ware

Poetic Therapy has high aspirations, as it is a book designed to serve humanity. Illuminating relationships of every hue, with brilliant strokes of humor and colorful satire, Greg Ware paints a tapestry that not only mirrors society, but inspires reflection. A soliloquy of syntax filled with contemporary iconic figures, dancing to metrical composition. Father Time is running out on Mother Nature!

Author Bio:
Meet the Author
Greg Ware has been an educator/administrator in California’s San Gabriel Valley for the last 15 years. He has a Master’s Degree in education and a teaching credential from Nova Southeastern University in Florida. In addition to nurturing young minds, Greg is an accomplished musician and producer with a Billboard Top – Forty hit to his credit, along with over twenty songs featured on television. His ability to pen humorous and quirky songs opened the door to writing comedy. Greg honed his craft under the tutelage of comedian Bobbie Oliver at the legendary Ice House in Pasadena, California. After a memorable performance there he was invited to take his routine to the Main Room at the iconic Comedy Store in Hollywood! Yet writing lyrics and jokes only satisfied a fraction of his evolving fascination with the divine purpose of humanity.
Greg was trapped inside his mother’s womb with company, as he’s an identical twin. He won the race out into this world by six minutes, only to discover he already had an older brother and sister. Growing up as one-half of the twin-whole gave him an empathetic perspective on the virtues of sharing. His friends nicknamed him Fair-Ware at an early age because it seemed apropos. As a child exploring the serene California foothills, he was exposed to the wonders of nature as an avid horseman. This son of a Pentecostal minister and Wapoo Indian was blessed with an abundance of intellectual curiosity. The spirits of his forefathers were awakened and judiciously distilled their guidance in his quest to write a book that could assist in the evolution of mankind.