You are here: Home / Books To Read / Penobscot Bay: The Slayer 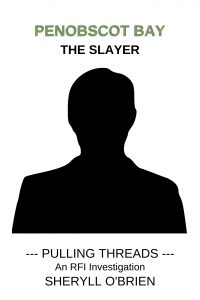 About Penobscot Bay: The Slayer:

Bestselling author, Muriel Dermot, becomes the main character of a real life mystery. After months of being stalked and barely surviving an attempt on her life, the young woman escapes to an island off the coast of Maine where she starts a new life as Christine Marsden. The man who wants her dead travels coast to coast, leaving in his wake a mounting pile of dead women—because he can’t kill her.

Author Bio:
Sheryll O’Brien is a storyteller, one who never refers to herself as a writer. She knows enough about the English language to get by, but her strength is the story — in the crafting of it, and the telling of it.
Part of her own story is this: On the last day of 7th grade, her English teacher told her that she should write a book one day. That day came 35 years later after a medical diagnosis pushed her toward fulfilling that lifelong goal.
Two years ago Sheryll penned the first sentence of a story titled, Bullet Bungalow. After typing the words, The End, she added the words, More to come… To her delight, there was more to come, namely, Netti Barn and Cutters Cove. To date, there are 16 stories that follow the lives of the Mahoney-Maxwell clan, and the cast of characters who help light their way, or darken their doorstep.