You are here: Home / Books To Read / Outside the Wire: A Foreign Service Officer in Southern Iraq 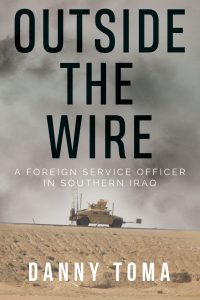 About Outside the Wire: A Foreign Service Officer in Southern Iraq:

Not everyone who serves in wartime wears a uniform. Outside the Wire is a story of one of these men, Danny Toma, a veteran Foreign Service Officer, who spent sixteen months with the Provincial Reconstruction Team in Basra, a joint State Department-U.S. Military operation in southern Iraq. Carrying out his duty alongside the 1st Infantry Division, and later the 36th ID, Toma describes in great detail the day-to-day experience of living in a war zone, from the thrill and uncertainty of enemy attack to coping with the frustration of trying to rebuild a country while others labor to tear it down. Combining humor with an attention to detail, he allows the reader to feel a part of the action and to get to know the personalities of those who were there on the ground – Americans, Iraqis, and British among them. More than just a history, it is also a tribute to the men and women, both civilian and military, who volunteered when their country called upon them and who forged a bond that the passage of time will never break.

Author Bio:
Danny Toma served for over twenty-two years as a Foreign Service Officer with the U.S. Department of State. His assignments included postings in Italy, Poland, Israel, Ireland, and Germany. During the Iraq War, he served an extended assignment with the Provincial Reconstruction Team in Basrah, Iraq, as part of a team dedicated to economic development in that region; the Superior Honor Award for efforts in that posting is one of several awards he received while working for State. Since retiring from the Department, he has been called back to service on short-term assignments in countries including China, El Salvador, Cuba, the Dominican Republic, Greece, Moldova, the Czech Republic, India, Spain, and Albania. He speaks Italian, Spanish, German, and Polish, as well as having some familiarity with several other languages. Prior to working for State, he taught history for several years in the Choctaw Tribal School System near Philadelphia, Mississippi. He lives in Oxford, Mississippi, where he is active in his local Catholic parish, the Sons of the American Revolution, the General Society of the War of 1812, the Military Order of the Stars and Bars, and the Sons of Confederate Veterans. Married for nearly thirty years to Dana Polus, a native of the Czech Republic, he has four children, three of whom attended his alma mater, the University of Mississippi (Ole Miss). His children currently live in Mississippi, South Carolina, and Ireland. He is also a knight of the Constantinian Order of St. George, the dynastic order of the House of Bourbon-Two Sicilies. His newest book, “Outside the Wire: A Foreign Service Officer in Southern Iraq” was published October 29, 2020.