You are here: Home / Books To Read / Our Last Shot by Bob Keaton 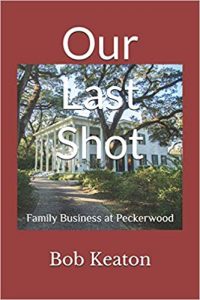 About Our Last Shot by Bob Keaton:

Tommy is leaving the country, but he hasn’t told anyone why. That—and a lot more—gets revealed during the last barbecue at Peckerwood, his plantation south of Atlanta.

He bought the decaying Southern relic 10 years ago and put a lot of money into the restoration. Now he’s ready to show it off.

So, he has invited the old college gang for the weekend, hoping to relive some memories and maybe even create a few new ones, as he sees his friends for the last time.

They do that, but a lot more happens, too. Old rivalries are reignited. Secrets get revealed. A young guy meets his birth mother for the first time and discovers who his dad is. Old love interests get rekindled. One member of the group reveals a sex change that nobody knew about. Oh, and there’s a murder, who will it be? And who did it?

Although they were close in college, now that they’re scattered around the country many of them haven’t seen each other in 20 years. Here are some of the characters invited to the reunion: A TV soap opera star from Los Angeles with a colorful past love life; a prominent high tech attorney in Seattle still trying to overcome the damage done by one of the gang back in college; an evangelist from Charleston whose ministry is based on “getting high” on drugs instead of Jesus; a famous New York actress with a mysterious past, and a well-known model from the 70s who now has his own agency and also a lot of baggage. Everybody’s favorite professor back in college, who was always there to listen to their problems and offer advice, shows up, but now he needs someone to listen to him and offer advice.

Not your typical weekend down on the old Georgia plantation

Author Bio:
Back in college I dropped out of a creative writing course because the professor was so critical of my work. Instead, I had a successful career in journalism. I’ve covered entertainment and politics for newspapers and also worked for associations and corporations.

After early retirement, I wanted to go back and prove I could be successful at creative writing, too. I’ve written four novels, three of which have already been published.