You are here: Home / Books To Read / One-Minute Monologues for Teens by Mike Kimmel 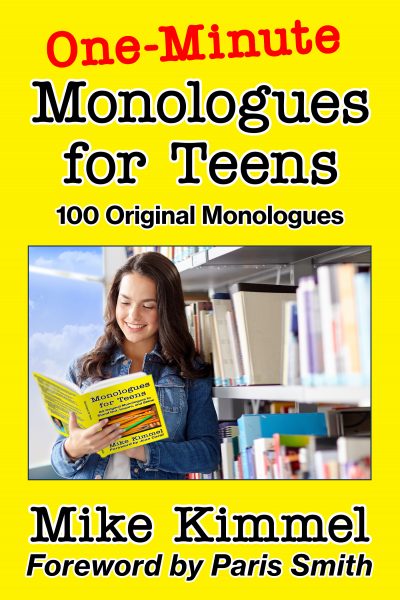 Need a killer monologue for an audition? Discover a wealth of fresh options in this detailed tome.
Sick of the same scripts being done to death? Looking for a soliloquy relevant to teenagers? Seeking material with a positive spin? Full voting member of the National Television Academy and Tonight Show sketch performer Mike Kimmel has been writing, acting, and producing for decades. Now he’s here to share a curated collection of one hundred of the best comedy and drama monologues.

One-Minute Monologues for Teens is the ultimate volume of family-friendly stage material to help you nail that college drama program audition or class assignment. With a range of topics applicable to young actors, these pieces require no costumes or props, and discuss ethical questions perfect for middle- and high-school minds to explore. And with literally dozens of gender-neutral and unique scenes to choose from, you’ll find the right piece to take you from zero to callback in no time at all.

One-Minute Monologues for Teens is the dramatic arts advantage you need in your next live performance. If you like fresh material, optimistic spins, and challenging ideas, you’ll love Mike Kimmel’s definitive resource.

Author Bio:
Mike Kimmel is a film, television, stage, and commercial actor and acting coach. He is a twenty-plus year member of SAG-AFTRA with extensive experience in both the New York and Los Angeles markets. He has worked with directors Francis Ford Coppola, Robert Townsend, Craig Shapiro, and Christopher Cain among many others. TV credits include Game of Silence, Zoo, Treme, In Plain Sight, Cold Case, Breakout Kings, Memphis Beat, and Buffy the Vampire Slayer. He was a regular sketch comedy player on The Tonight Show, performing live on stage and in pre-taped segments with Jay Leno for eleven years.

Mike has appeared in dozens of theatrical plays on both coasts, including Radio City Music Hall, Equity Library Theater, Stella Adler Theater, and Theater at the Improv. He trained with Michael Shurtleff, William Hickey, Ralph Marrero, Gloria Maddox, Harold Sylvester, Wendy Davis, Amy Hunter, Bob Collier, and Stuart Robinson. He has a B.A. from Brandeis University and an M.A. from California State University.

As an educator, he has taught at Upper Iowa University, University of New Orleans, University of Phoenix, and in the Los Angeles, Beverly Hills, and Burbank, California public school districts. He is a two-time past president of New Orleans Toastmasters, the public speaking organization, and often serves as a speech contest judge. Mike has written and collaborated on numerous scripts for stage and screen. His full-length historical drama on Presidents Lincoln and Garfield was a 2013 semi-finalist in the National Playwrights Conference at the Eugene O’Neill Theater Center. He is the 2014 recipient of the Excellence in Teaching Award from Upper Iowa University. Mike is a full voting member of the National Academy of Television Arts and Sciences (the Emmys).