You are here: Home / Books To Read / Once Upon a Soviet Child: Piano, Potatoes, and Privations 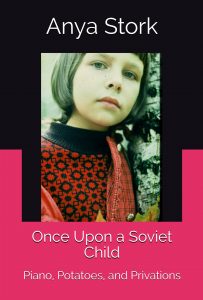 About Once Upon a Soviet Child: Piano, Potatoes, and Privations:

Growing up in Russia from 1973-1991 was an exercise in bloated rhetoric and startling contrasts between the privileged class and the ordinary citizens, including Anya’s family. Stork narrates the touchstones of her life as a child and teenager, exploring the everyday aspects of life: eating, bathroom habits, shopping, medical and dental care, schooling, and the lack of sex education. Stork contrasts life in Moscow with the simpler life in the country and Ukraine. She explains how she devoted a large part of her life to preparing at camp and school for an American attack on Russia. She details what life was like for the average Russian child: mischief but in cramped housing conditions, with shared toilets and kitchens, and in all areas a lack of privacy, but strong unhealthy competitiveness throughout their society. Through touching and often humorous stories of what occurred in her family, Stork explains Russians’ attitude toward sex, childcare, and popular media. Most importantly, Stork emerges as an articulate spokesperson for intelligent analysis of her society and family.

As the oldest child of five, she is expected to excel in school and piano while helping out at home. Teenagers will relate to the overwhelming feelings she experiences but can’t express. Readers will cheer when she throws off the yoke of her teachers’ unreasonable expectations and charts her own course.

Anya Stork was born in 1973 in Russia and lived through the Cold War era and the collapse of the Soviet Union. She studied Russian language and literature at St. Petersburg State University in Russia. After immigrating to the United States in 1994, Anya obtained two advanced American degrees from California State University-Chico: a bachelor’s degree in political science: international relations (cum laude, special awards) and a master’s degree in communication and education (Graduate Student of the Year Award). This book is her second publication. The first publication was in the academic field as a master’s of science project entitled, “Using Multimedia in Teaching Russian History: Alexander Pushkin” (CSU Chico, 2001). Other published works with her participation include the Russian-American translations of the historical research books and documents for the Department of History at CSU Chico. Anya’s volunteer work includes twenty-plus years of Russian-American oral and written translations in academic and business environments, as well as participation in various international humanitarian projects, such as Amnesty International, Campaign for Tibet, Change.org, and other humanitarian projects.