You are here: Home / Books To Read / On His Own Terms by Doug Shidell 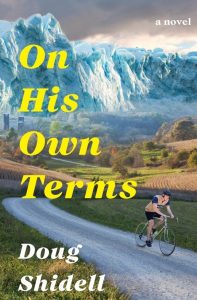 Delone Taylor didn’t belong. Raised on welfare by a solo mother in small town Wisconsin, he rebelled against the labels, the charity and the assumptions. He didn’t fit in at the University, either, where he carefully shielded his past from friends and strangers alike. He didn’t know if he belonged anywhere- even in the shell he’d built around himself.
The bicycle was his escape. It didn’t judge or ask questions, but he couldn’t ride away from his past, including an ancient past that preceded civilization itself.
When a singular woman from a wealthy family pierces his shell, Delone is forced to confront the one thing he can control; how he navigates an immovable past in a fluid present.
Bikes, glaciers, the Vietnam War, and the Driftless Area of Wisconsin come together in a coming-of-age tale that explores the relationship between forces beyond our control and our reactions to them.

Author Bio:
At age nineteen I wanted to write a book. I’m not sure why, but I was sure that no one would want to read a book by a nineteen year old, so I needed a hook. I had been bicycling as an adult for a year and in the enthusiasm of youth figured I was something of an expert, so I set out to write a bicycle touring guide. I used the maps and tour descriptions to sell the book, but added touring stories to satisfy my creative needs.
Sometimes the brashness of youth pays off, if the payoff you’re looking for is freedom, exploration and creativity, not income. That book, co-authored with Phil Van Valkenberg, lead to hundreds of low paying freelance opportunities, five more bicycle touring guides, dozens of bicycle maps and a career in the world of bicycling. The career paid the bills. Income from the books, maps and freelance opportunities fed my cycling habit and eventually allowed me to ratchet back my “career” to three days per week.
Those three days were spent in a cubicle. It was a good job, but I lived for the other four days when I could write, create maps, give talks and explore endlessly. My world expanded from the cubicle to the metro area of the Twin Cities of Minneapolis and St. Paul, then further afield across the states of Minnesota and Wisconsin and a bicycle tour that eventually crossed the breadth of the United States.
Wherever I went, and whatever I did, I felt compelled to write about it: opinion pieces, touring stories, interviews and observations. Some of the pieces elicited kudos, others derision, many a mix of both.
I never developed the tough skin of a hardened journalist. I winced and groaned when the response was negative and my stomach churned when I submitted a piece likely to generate backlash. The best protection was to reread the story multiple times before submitting it. Did it convey my real thoughts? Was it clearly written? Did I use the right words? If I could honestly say “yes,” then there was nothing more to do. I submitted the piece and waited for publication.
Like so many journalists, I felt that I had at least one novel in me. And like so many journalists, I had a wealth of experience to draw from. I’d interviewed folks from many walks of life, observed with a focused eye and a developing story line, lived an itinerant life for too many years and worked at the craft of writing.
I could tell a story, but could I write a novel? The biggest challenge, and the most enjoyable revelation, was that a novelist can lie. As a journalist, I worked hard to get an accurate story down on paper. As a novelist, I had to work hard to break those bonds of accuracy. Sure, I had to keep the story, down to minute details, believable, but beyond that I could lie, cheat, fib, fabricate, revise, prevaricate. Call it what you wish.
Sometimes those fabrications revealed a truth that ran so deep it shook me to the core. I’d stop, take a few deep breaths, wipe my eyes and walk away to regain my composure. I don’t expect the same impact on readers, because the act of writing can mine a deep vein that reading can only acknowledge.
Whether fiction or journalism, the same criteria applies to a story. Did it convey my real thoughts? Was it clearly written? Did I use the right words? I checked those boxes with “On His Own Terms” and published the story.