You are here: Home / Books To Read / Oh Daddy Chronicles: The Tasting by Barry Robbins 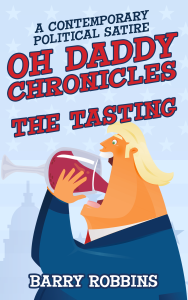 About Oh Daddy Chronicles: The Tasting by Barry Robbins:

Donald Trump has a problem.

Forget the subpoenas. Forget the lawsuits. Forget the investigations. There’s a fly with sophisticated eavesdropping equipment that’s been following him around in the Oval Office and then at Mar-a-Lago. Transcripts of Trump’s conversations – with Fauci, with NSC staff, with Putin, with Ivanka, with lots of others, are now available for all to see.

The result – you’ll laugh your butt off and wonder, at times, whether it really is fiction.

Two-time award winning humor author Barry Robbins samples each previous book in his Oh Daddy Chronicles series and adds some new material to produce this tantalizing satire just perfect for fans of Stephen Colbert and Trevor Noah. Oh Daddy Chronicles: The Tasting allows you to swirl those fly-eavesdropped conversations around your palette and savor the taste – the taste of laughing at Donald Trump, that is.

So swirl, savor, and laugh.

He combined his interest in politics with his disdain for a certain current politician whose name rhymes with Dump, and an unfettered imagination, to produce the satirical world of Oh Daddy Chronicles, now consisting of three books.

He spent his time in exile in the accounting world at a large, international accounting firm. It lasted 26 years. Then he quit. He moved to balmy Finland with his two beautiful daughters and Finnish wife. Not knowing the language, he followed in the footsteps of most expats and became adept at taking out the trash. But he also developed another pair of eyes – seeing the world and the U.S. differently. He now resides principally in Florida.

With two first place awards for Humor under his belt, Robbins wonders if he has put a dent in the accountant stereotype.