You are here: Home / Books To Read / New Yorkers: A Feisty People Who Will Unsettle, Madden, Amuse and Astonish You, by Clifford Browder 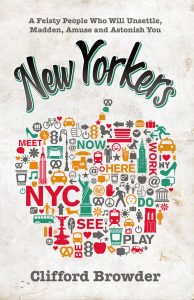 About New Yorkers: A Feisty People Who Will Unsettle, Madden, Amuse and Astonish You, by Clifford Browder:

Clifford Browder’s New Yorkers is the quirky memoir of a longtime resident who loves his city, a selective glance at that city’s amazing history, and a bit of a travel book, all rolled into one. A fun book, but with some serious moments. It’s for people who love (or hate) the city, and people who live there, and people who have visited or want to visit it. Readers will learn:

• Who New Yorkers are and how they live and die
• How many languages are spoken there (you’d be surprised)
• How many witches there are (you’d be surprised)
• Whose funeral caused an all-day riot
• Why a cemetery offers trolley-car tours and whiskey tastings
• Which flashy modern hotel would-be suicides should avoid at all costs, and why
How the author had an affair with a Broadway chorus boy (if the Cardinal Archbishop of New York could do it, so could he).

New York is the most exciting city in the world. Everyone should know it, at least a little. It’s unique.

Author Bio:
Clifford Browder is a writer living in New York. He has published two biographies, a critical study, three nonfiction titles about New York and New Yorkers, and four novels in his Metropolis series of historical fiction set in nineteenth-century New York: The Pleasuring of Men, Bill Hope: His Story, Dark Knowledge, and The Eye That Never Sleeps. A fifth novel is forthcoming.

His blog, “No Place for Normal: New York,” is about anything and everything New York.

His nonfiction title No Place for Normal: New York / Stories from the Most Exciting City in the World, is a collection of posts from his blog that won first place in the Travel category of the 2015-2016 Reader Views Literary Awards, and the Tenth Annual National Indie Excellence Award for Regional Non-Fiction.

His poetry has appeared in various journals online and in print.

A longtime New York resident, Browder has never owned a television, a car, or a cell phone. Mostly vegan, he is fascinated by slime molds and a mushroom known as Destroying Angel, never kills spiders, and eats garlic to fend off vampires. (So far, it seems to be working.)