You are here: Home / Books To Read / Monster! by Morgana Herman 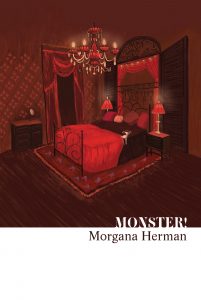 If you enjoy the farce and caustic wit of George Saunders, Christopher Brookmyre, Colin Bateman, Carl Hiaasen this one could be your thing!

Being the children of legendary actors is a tricky thing for childhood friends John and Martina. They reunite later in an electric but catastrophic relationship that lasts just three days after their wedding. But their relationship also means catastrophy for Maelstrom. The nasty balaclava bearer, owner of an exclusive gentlemen’s club for the filthy and the filthy rich. While John and Martina’s lives are threatened, troubled John becomes increasingly darker while Martina with the help of enigmatic L, chases secrets that begin from her curious blackouts, her French Bordello night and the murder of John’s girlfriend five years earlier. And the Mr and Mrs hitmen duo have a thing or two to teach.
An absurd farce ensues, with sarcastic wit, dark and odd characters and a few existential edges.

Author Bio:
I was born in Greece, currently living in UK for 23 years. I read Philosophy and later Film theory and Technologies. I have published poetry and poetry translations as well as scripts and plays. I have worked extensively on TV, radio and newspapers as an arts &culture journalist and a critic. Socio-political satire was my other theme for late night radio shows and newspaper columns. Many years I have done filmmaking and worked on sets as an assistant director and director. However, being a single mother of young kids, I have had to supplement my income with a few colourful jobs as a chamber maid, asylum seekers ‘ hotel administrator, supermarket assistant and a psychic guy’s PA. This book is my first attempt deviating from literary, experimental and transgressive fiction into the mystery thriller comedy genre, thus the pseudonym Morgana Herman!