You are here: Home / Books To Read / Midnight Black – The Purge by R. J. Eastwood 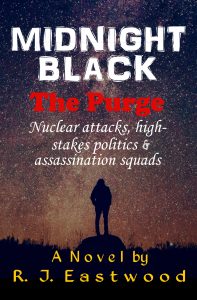 About Midnight Black – The Purge by R. J. Eastwood

Ex DEA agent, Billy Russell, committed a heinous crime against a man who committed an unspeakable crime against him. Billy was sentenced to 20 years hard labor in total isolation from the outside world. Without explanation, he is suddenly paroled 5 years early. Returning to society, he learns that an isolated nuclear attack has spread primal fear of a nuclear holocaust, which allowed autocratic billionaires to seize control of the world. But the new world government’s faulty economic policies have led poverty, crime, disease, and rampant drug addiction.

As a condition of his parole, the government assigns Billy to a secret government sanctioned assassination squad whose job it is to eliminate political dissenters. Their gaffe, however, was assuming Billy would do their bidding willingly. They were wrong. Billy is approached by a secret underground dissident group planning to overthrow the authoritarian world government. He joins them to end the government’s demonic reign of tyranny only to discover the shocking details of what is really taking place.

The first page and a half will grab you, the unexpected ending will spin you around.

Author Bio:
Robert J. Emery writes under the pen name R.J. Eastwood. Over his long career as a member of the Directors Guild of America, he has written, produced, and directed both feature films and television programming and everything in between. His production work has garnered him over 75 industry awards along the way. To date, Mr. Emery has published seven books, four of which were nonfiction based on his Starz/Encore television series “The Directors.” His first novel (as Robert J. Emery) was chosen as one of the top five finalists in the Next Generation Indie Books Awards.
In the Fall of 2017 he published the science fiction adventure “The Autopsy of Planet Earth.” It won the 2018 Readers’ Favorite Gold Award for Science Fiction, the 2018 Book Talk Radio Book of the Year, and the 2017 Authors Circle First Place Award for Fiction
With the release of his newest novel, “Midnight Black”, he is busy working on his next entitled “The White Prize.” When not writing, Mr. Emery can be found in the kitchen creating and preparing sumptuous Italian meals. He credits his culinary expertise to his Sicilian mother, who took the time to teach him to cook.

Visit Mr. Emery’s author web site to learn more about his background as a writer/director in the entertainment industry as well as his book writing. He enjoys hearing from readers and encourages them to connect with him through his (where there is an email address) as well as his social media sites.