You are here: Home / Books To Read / Love’s Legacy 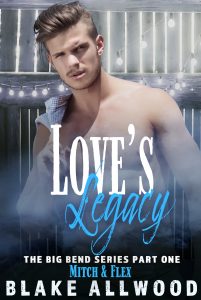 Exhausted from a lengthy court battle over his grandparents’ West Texas ranch, Flex is eager to sell the property and put the whole matter behind him.

While meeting the realtor, Flex happens upon sexy motel owner Mitch. As sparks fly between the two, Flex decides selling his family’s legacy may not be the right thing to do.

However, ownership of the ranch seems to have initiated sinister nightmares for Flex. Stranger still, these dreams somehow involve Mitch. When the nightmares begin coming true, their concerns deepen. Especially when Flex’s latest vision predicts his own demise.

As darkness closes in around them, will Mitch and Flex’s love be enough to ensure their survival? Or will their hopes for a future together go up in smoke?

Author Bio:
Blake Allwood was born in west TN, then moved to Kansas City MO after attending college in Lamoni, Iowa. He met his husband in 1995 and they officially married in 2015, once gay marriage was legalized. In 2017, he and his husband sold their home, purchased an RV and began traveling the country with their two dogs. Their travels provide the inspiration and settings for many of his novels.

Typically, Blake can be found relaxing in the RV or by the fire with his laptop and their Jack Russell Terrier, Buddy, curled up between his legs demanding attention. Denver, their Siberian Husky mix is often asleep at his feet or playing tug of war with Blake’s husband.