You are here: Home / Books To Read / LOST HELIX 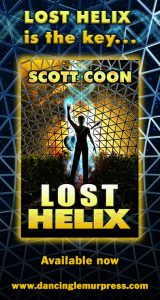 Stuck on an asteroid mining facility, DJ dreams of writing music, not something you can do for a living out there. His dad is a corporate hacker and his best friend Paul prepares to escape to become a settler in a planet-wide land rush, but neither option interests DJ. As such, he faces a future assigned to him by the mining company that owns the space station he calls home.

When his dad goes missing, DJ finds a file containing evidence of a secret war of industrial sabotage, a file encrypted by his dad using DJ’s song LOST HELIX. Caught in a crossfire of lies, DJ must find his father and the mother he never knew.

The mining company sends Agent Coreman after DJ and his guitar, which has LOST HELIX on its hard drive. DJ and Paul escape the facility and make a run for civilization, risking their lives as stowaways, never knowing they have the means to unlock the file.

LOST HELIX takes classic science fiction concepts and asks, “But what next?” After terraforming, how does humanity go about populating their new planet? And those domed ships that take multiple generations to reach a distant planet, what happens to them after the planetary colony is established? The world of LOST HELIX explores some answers.

The story has everything a YA reader wants in a Space Opera: a bit of melodrama, a bit of realism, a bit of magic, and a lot of fun. The cold commercial environment the story moves through is peppered with warm, realistic people, each interesting in their own way, each with their own problems and goals. And there are so many people to root for: DJ the wizard with his magical ability to hack any computer, Paul the streetwise sports hero with his optimistic charm, Maya the feisty and talented stowaway who appears and disappears like a wraith, and even Coreman the villain who sees no higher calling than to preserve the status quo.

Though a small part of the novel, DJ’s confrontation with his bully will be both satisfying and enlightening. And Maya proves to be a strong female character; her romance with Paul evolves in a realistic and healthy way, providing a positive role model for young readers.

LOST HELIX is not the idealistic world of a better future where humans have evolved. It is corporate greed, space pirates, intrigue, and adventure. More than anything, LOST HELIX is good old-fashioned escapism, which we could all use right now.

He served six years, rising to the rank of Sergeant. His service including a tour in Kuwait where he received a First Army Combat Patch and the Joint Service Achievement Award. Now a software developer for a major bank, Scott brings his computer and military experience into his work, along with a sense of spectacle.

His debut novel LOST HELIX, a sci-fi adventure/mystery, is available now. Scott’s first published story, “Firewall,” appeared in Nth Degree Magazine in 2006. His short “Enduring Winter” was a finalist in the Writers of the Future Awards, won Second Place in the New England SciFi Writers Assn Contest 2016, and was published in Bewildering Stories, Issue 849, March 2020.

Scott Coon shares his knowledge of writing with others and helps other creatives do the same. He hosts the Writers of Sherman Oaks Critique Group meetings and National Novel Writing Month write-in events. His YouTube channel and websites provide insights into his work and give advice to writers. His Little Creative Interview series helps to foster learning in the creative community. See his websites for more information.