You are here: Home / Books To Read / Livin’ After Midnight by Tom Nelson 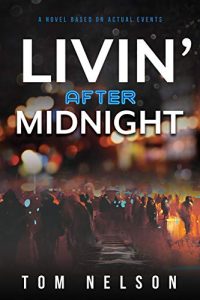 Livin’ After Midnight by Tom Nelson

Livin’ After Midnight chronicles the journey of Tommy, a young runaway, as he stumbles into one adventure after another. He eventually grows up to become Tom, an ex-con trafficking cocaine into LA for a Peruvian Drug Cartel.

Tom is a handsome rogue who stumbles into the good graces of the Cartel after standing up for a complete stranger in jail. Tom’s life is filled with exciting, dangerous adventures that he is lucky to have survived. From fights in the LA County jail to shootouts in Downtown and South Central Los Angeles, Tom has seen and done it all. Miraculously, he is still alive to tell these tales.

Our journey spans two decades of the wildest, craziest and funniest adventures you can possibly imagine. Just another day in the life of a drug addict and trafficker.

Livin’ after Midnight also tells of forbidden love and incredible friendships. Bonds that remain unbroken to this day!

Buy the book, and follow the author on social media:
Get This Non Fiction Book From Amazon.

Author Bio:
Tom Nelson was a cocaine trafficker during the crack epidemic of Los Angeles. His clientele ranged from Hollywood celebrities to supplying crack houses in Downtown and South Central LA. That life came to an end when Tom was busted in 1997 and sentenced to 7 years in prison. Now, Tom is an entrepreneur and philanthropist who gives back to the communities he once harmed by performing public speaking and other forms of community outreach.

Tom is the founder and president of the Kelly Maddon Foundation which helps existing domestic violence organizations with managerial and fundraising support.
Tom also owns the largest private training facility in Los Angeles and is one of the most sought after nutrition specialists and fitness trainers in California. In 2013, Tom was voted “Trainer of the Year” and received a commendation from the City of West Hollywood for his contributions to fitness within the community. In addition, Tom’s facility – Muscle Mechanics – won the “Best of Los Angeles Award” for being the Best Gym in Los Angeles – 2020.

Tom restores classic American muscle cars in his spare time and writes novels about the harrowing experiences of his past.

Tom resides in the quiet little town of Solvang, California with his loving family – a million miles away from the crazy life he once lived!