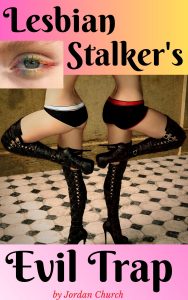 Senior girl Anne-Marie has escaped the clutches of wicked freshman lesbian dominant Rosalie. But only after Rosalie’s clutches did quite bit of clutching.

Rosalie the Lesbian Stalker still intends to Own Anne-Marie. After all, everyone knows you can’t keep a good lesbian stalker down!

Anne-Marie struggles with her own sexual nature and her unexpected submissiveness and enjoyment of humiliation. Rosalie has invaded her mind and she can’t seem to get her out!

Rosalie has other plans cooking as well. She tamed her dorm neighbor Tina and made her into Tina the Piggy, human sex animal of the sexiest kind. However, Tina still has two roommates who may continue to complain about the noise of loud female orgasms and pet play coming from Rosalie’s dorm from her first three lesbian pets.

Rosalie thinks, ah, if only there was a way to keep them from complaining ever again and have them also become her own personal totally Owned lesbian sex pets.

Well, maybe there is a way! An evil trap to dominate and control them!

Can Anne-Marie resist what she is becoming?

Can Rosalie pull off a simultaneous double-seduction and domination of Tina’s lovely roommates?

Will Tina the Piggy really give in and help Rosalie’s sexual conspiracy to take over her roommate friends?

Can Rosalie make one of them orgasm in a whole new never-before-done way? Can she lesbian tame them both at the same time despite their dislike of her?

Can Julie and Wendy resist Rosalie’s plot? Julie is a good conservative young woman and Wendy has a serious boyfriend. Will either factor save them?

I left for the broad open plains in the surrounding areas. I usually stayed still during the day and wondered about at night assuaging my curiosities so as to cause the least alarm among the residents. The cultists did pursue me with great insistence and continued demands for me to be violent. They claimed I owed to them for utilizing the souls of deceased Nazis from nearby Stalingrad in order to bring me to life.

Despite the politeness of my refusals they eventually, the fourth night, took to throwing Molotov cocktails at me. Ever been set on fire? I’ll share this with you: not fun. I do not recommend it. Having newly mobile drain spouts and gutters and ready access to streams saved my hide. My shingles, too.

This went on night after night and, let me tell you, it got old quick. Then… things got worse. The Angels showed up. The avenging kind. Revenge for what? Well, as they claim, I guess I am some kind of “abomination before God”. I really don’t get that “before God” part. Is it OK to be an abomination behind him?

So, how am I still here to tell you about all this and how can I even type it? I will tell you.

I’m really quite a lucky church even within bouts of bad luck. Just two months before the cultists animated me the priest of my church needed to replace the lightning rod on me. A rusty contraption poorly assembled and a hazard to the churchgoing folk.

A normal average-sized lightning rod could never have absorbed those Avenging Angel lightning bolts. However, my priest was a proud priest and he wanted me to be taller than that other Orthodox Church on the Western edge of Serafimovich. By doggedly yelling at the congregation seven Sunday’s in a row he raised enough money to have the biggest lightning rod in all of Volgograd Oblast installed on me, thus bringing my height up an additional seventeen feet.

So, I mostly absorbed those lightning bolts. Those Avenging Angels were very upset and I did feel bad for them but, hey, what choice, right?

Some lightning bolts did get through when shot from near enough and at certain angles. Hurt bad! Note: Pain is one of the biggest drawbacks to being brought to life. I think we can all agree on that.

I didn’t sleep for twenty-seven days and the whole time was so painful.

Even my giant lightning rod was beginning to melt….

The end was coming for me. A big conflagration. Then ashes. Then Hell, right? They weren’t going to destroy me and then take me up to Heaven were they? Elitists, that’s what they are!

After twenty-seven days of this unfair lightning bolt abuse I was, by then, in Syria a bit North of the Sea of Galilee. I didn’t know where I was at the time, of course. I plunged into a river to escape or limit the bolts. I was so tired I thought I’d float and just sleep a while even if they were bolting me incessantly. I was that tired!

I even thought if I was lucky I wouldn’t even wake up at all….

I did fall asleep.

I did wake up.

I was on the shore on the West side of the river. I… wasn’t a church any more. I was… a Human? Still not completely sure if I am. Or what happened. Or where the Avenging Angels went. Or if they’re coming back after reloading on lightning bolts.

Humans need names. Why? People always ask. Like, usually right away. Turned out that the river I plunged into was the Jordan River. And, you know, I used to be a church. So, I tell people to call me Jordan Church.

I’m sort of in hiding now, but I’m really not sure if you can hide from Avenging Angels or if I still need to. Cultists would be more of a problem now though. I assume Molotov cocktails feel just terrible on human skin!

Feel free to email me with thoughts, feedback, suggestions, questions, just whatever.

Get my newsletter notifying you of new releases as they occur: