You are here: Home / Books To Read / Lady Justice and the Bad Seed by Robert Thornhill 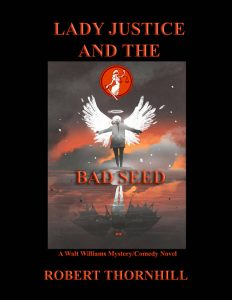 Lady Justice and the Bad Seed by Robert Thornhill

Walt is surprised to learn that his old partner, Ox, has a brother. Ox had never mentioned Lenny who was serving time in prison.
Ox was just as surprised when Lenny showed up at his door claiming he had found religion and turned his life around. He was even more surprised to learn that his brother, the bad seed of the family, was now an ordained minister.
As Lenny’s ministry grows by leaps and bounds, Walt and his friends are skeptical. Was Lenny’s conversion real or is it an elaborate con?
Walt is faced with the age-old question — can people really change? What do you think?

Author Bio:
Award-winning author, Robert Thornhill, began writing at the age of 66 after a 36 year career in real estate. In ten years, he has published 39 novels in the Lady Justice series, the seven volume Rainbow Road series of chapter books for children, a cookbook and a mini-autobiography.
Nine of the Lady Justice novels received the Pinnacle Achievement Award from the National Association of Book Entrepreneurs for best new mystery novel, nineteen have received 5 Star Reviews from Reader’s Favorite, and twenty-four have been ranked #1 on Amazon in the past twenty-four months
Many of Walt’s adventures in the Lady Justice series are anecdotal and based on Robert’s real life.
Although Robert holds a master’s in psychology, he has never taken a course in writing and has never learned to type. All 49 of his published books were typed with one finger and a thumb.
He lives with his wife, Peg, in Independence, Missouri.