You are here: Home / Books To Read / It’s Hard to Be a Person: Defeating Anxiety, Surviving the World, and Having More Fun 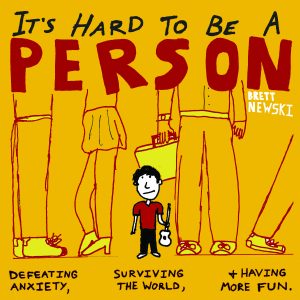 About It’s Hard to Be a Person: Defeating Anxiety, Surviving the World, and Having More Fun:

Blending humor with mental health struggles, alternative songwriter/illustrator/podcaster Brett Newski makes fun of his own anxieties by offering mental health boosts in his first book It’s Hard to be a Person: Defeating Anxiety, Surviving the World, and Having More Fun.

“I love how easy Newski makes it to plow through the dark stuff with some well placed humor and grit.” -Stelth Ulvang (of the Lumineers)

“When I’m on the road doing comedy, half my job is anxiety. Brett’s book is a great tool for how to use that energy. And the best part is, when I’m too lazy to read, I can just look at the pictures.” -Charlie Berens, Manitowoc Minute

Author Bio:
BRETT NEWSKI is an alternative songwriter, illustrator and podcaster based in Milwaukee, WI, USA. He has been featured on Rolling Stone, NPR, American Songwriter, SiriusXM, Boston Globe, and Billboard.

As a musician, Newski has played alongside acts like Pixies, Violent Femmes, Courtney Barnett, Manchester Orchestra, and Better than Ezra. He continues to tour over 100 dates per year.