You are here: Home / Adult / Impossible Seduction 11 by Jordan Church 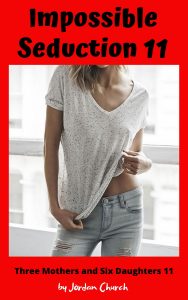 The older dominant lesbians friend team of Gretchen and Lydia have lured the sisters Lilliana and Julissa into their house supposedly for photo shoots. They are sexy and scantily dressed and determined to be “cooperative” because of the fake modeling opportunity.

Gretchen took Julissa, the younger sister, and boy did she take her! But she sure isn’t done with her! Gretchen has Julissa where she wants her. Right between her legs!

Julissa still struggles for independence and against her own arousal.

Lydia has the older sister, Lilliana, in the basement and she has dark nasty plans for her.

Seduction and domination is the plot for the sisters and the fate of the sisters. Unless… can their goodness, their normalcy, their heterosexual natures, or even, at least, the fact Gretchen and Lydia are near strangers, much older, and none too attractive save the sisters from this conspiracy?

Can the dommes really seduce, dominate, and sexually train the two sisters simultaneously on different levels of the same house?