You are here: Home / Books To Read / I Eat Men Like Air by Alice Berman 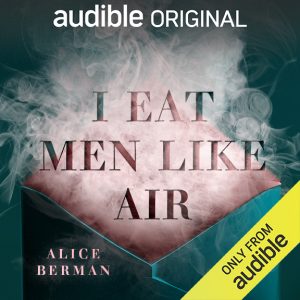 With the snow falling fast on a New Hampshire mansion, seven 20-somethings assemble to celebrate an upcoming marriage in a debaucherous weekend that will change their lives irrevocably. The lavish trip to celebrate Will and Jessica’s upcoming nuptials brings together a cast of characters who know each other from Ivy League schools and childhood Upper East Side haunts: Lulu, an LA-based Instagram influencer; Maxie, a former Park Avenue princess, now Midwestern housewife; Yael, an ER doctor from Ohio; Rob, a colorless Wall Street trader; Will, a morality-obsessed lawyer; Jessica, his perfectionist bride-to-be, and Alex Sable, a lawless bon vivant. Alex, son of a billionaire hedge-fund scion, was the sole witness against his classmate in a serial rape trial 15 years ago, which seems to follow Alex wherever he goes.

By Will and Jessica’s wedding day, four months later, Alex Sable would be dead. In that same house, in a bathtub filled with his blood.

Can Tyler, a well-known podcast reporter, pry his way into their closed-door world, and parse through the secrets that connect the seven like a web? As Tyler attempts to find the truth behind the months leading up to Alex Sable’s dramatic death, he follows the bridal party – whose lives have spiraled in wildly different directions – through the events that brought them to a fateful night.

Told in dual time lines, the months leading up to the wedding and the investigation thereafter, I Eat Men Like Air is a riveting look at the unraveling of a friend group punctured by violence, and a chilling depiction of the rage that festers when it’s kept secret.

Author Bio:
Alice Berman is a New York City-based author whose first Audible Originals book, “I Eat Men Like Air,” will be published September 2019. The fiction author sold her book, “Lost Boys and Technicolor Girls,” to ABC, where it is currently in development to become a show with Freeform. Hailing from a political family in Washington, D.C., Berman attended Choate Rosemary Hall in Connecticut and graduated Magna Cum Laude with a degree in English Literature from the University of Pennsylvania, winning the Gibson Peacock Award for creative nonfiction. Post-grad, Berman lived in London and Los Angeles where she co-founded the app, Shopfeed, and served as Creative Director for Pop & Suki. Today, Berman writes from her Tribeca loft. Alice is a founding board member of animal advocacy group Creatures Great and Small; she serves on the Young Collectors Council Acquisitions Committee at the Guggenheim and the Blair House Restoration Fund, and she is a Young Lion Conservator at the New York Public Library.