You are here: Home / Books To Read / Midshipman Henry Gallant in Space 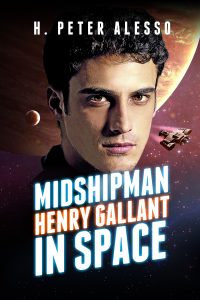 About Midshipman Henry Gallant in Space

As the last starfighter, only Henry Gallant can stop the alien invasion.

In an era of genetic engineering, Henry Gallant is the only Natural left in the United Planets’ fleet.

With the fleet on the verge of annihilation from invading aliens, analyzing the captured computer in Gallant’s possession is critical to stopping the invasion. He can expect no help as he navigates through threatening aliens on his way to Mars. His shipmates doubt he is up to the challenge.

But as the last starfighter in Squadron 111, the lives of his shipmates, as well as a good many others, depend on Henry Gallant.

For Fans of Honor Harrington and Horatio Hornblower.

Author Bio:
As a scientist and author specializing in technology innovation, H. Peter Alesso has over twenty years of research experience at Lawrence Livermore National Laboratory (LLNL). As Engineering Group Leader at LLNL, he led a team of computer scientists, engineers, and physicists in innovative applications across a wide range of supercomputers, workstations, and networks. He graduated from the United States Naval Academy with a B.S. and served in the U.S. Navy on nuclear submarines before completing an M.S. and an advanced Engineering Degree at M.I.T. He has published several software titles and numerous scientific journal and conference articles, and he is the author/co-author of fifteen books.