You are here: Home / Books To Read / How to Hunt a Menacing Magical Shadow by Christine Schulz 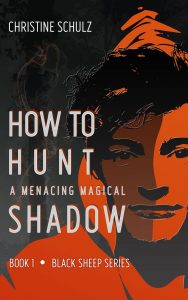 How to Hunt a Menacing Magical Shadow by Christine Schulz

New magic is unpredictable, unreliable, and unsafe. The same could be said about Adrian Cotter, a snarky, cupcake loving, rookie police officer with the uncanny ability to make magic do anything but what it’s actually supposed to. The laughingstock of the police station, Adrian is determined to stick it to everyone who’s ever called him a worthless piece of trash, dreaming to one day become a hero everyone adores.

That is until he becomes the #1 most wanted criminal in the country.

Hunted by a menacing shadow and haunted by a voice in his head, Adrian sets off on a mission to catch the person responsible for his mess. Along the way, he teams up with the Black Sheep, a group of badass military soldiers from another world where magic is far more advanced than he could ever imagine. With their help, Adrian learns all about the magic that is new to his world, and uncovers his true magical abilities along with a startling discovery about his past that will no doubt determine his future. But who can he trust is telling him the truth? And will he find a way to change his fate to become the hero he’s always wanted to be before time runs out?

Buy the book, and follow the author on social media:
Get This Fantasy Book From Amazon.
Visit the Author’s Twitter page.

Author Bio:
Christine Schulz is a fantasy writer and lover of all things magic. As a young child, she would put her imagination to work, pretending to live in a fantasy world where she could fly, fight the bad guys, and save the world. Although she could never master the art of flying, she did manage to put together all those creative ideas into a compelling story that formed her debut series Black Sheep.

When she’s not writing, Christine can be found reading, cooking up a delicious meal, and spending time with her furry pug companion.