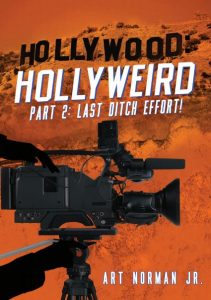 Whew!!! Well we’ve finally made it to the 2nd book & it is: ‘Hollywood: Hollyweird’ Part 2 “Last Ditch Effort! In this one we take a completely different approach because in ‘Hollywood: Hollyweird’ Part 1 it was all about me the Bodyguard all up in the twilight hours at the Club in HOLLYWOOD, CA!!! Running behind Chris Rock, Paris Hilton & Jamie Foxx, Kiefer Sutherland & Britney Spears just to name a few! But you see in Part 2 we go on the extended vacation cross country in the good ‘ole US of A – back east! What we do is take the most important thing learned in HOLLYWOOD is the ‘Hollywood Mentality!’ Especially after living there for close to a Decade it just jumps out – surprise, surprise! Our first stop is ‘DisneyWorld’ down in postcard picture Florida! It went well we had to make sure our feet were planted…..then we cold took off & grabbed the Title! Because thats what Hollywood, CA is the Top entertainment capital & Tourist attraction in North America! Next we had ‘Dollywood’ way up in the mountains of Gatilinburg, TN we had to break fool out there-the family & all with the cowboy hat & boots! But yet and still we just manhandle the Title! With the ‘Hollywood Mentality!’ Get my Drift? Also in Part 2 is the ‘Dynamic Duo!’ they solve mysteries in Tinseltown! They are ‘The Champ!’ a broke down version of James Brown but he’s slick & he’s been there for over 20 years! Then there is the thick dreadlock brotha that’s the ladies man all up in some Hollywood; but very intelligent! They do it right & they will helm ‘Hollywood: Hollyweird’ Part 3…..A Mystery Novel!…….So grab yourself a eBook or two & ‘Hollywood: Hollyweird’ Part 1 is available on this website as well! Thanks & enjoy! – Art Norman Jr.- black author.

Author Bio:
Well I hold a BA in Psychology from the world-famous HBCU: North Carolina A&T State University! I enjoy going on long walks with some fresh kicks on! After being in HOLLYWOOD, CA for nearly a Decade I pay close attention to details! I love to swim out in a Deep Thought Style from time to time…..And you can always catch me reading some novel or on the computer……Thanks!