You are here: Home / Books To Read / Haggard Hawk 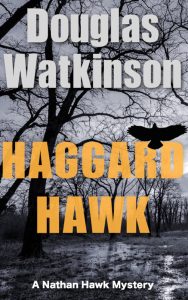 HAGGARD HAWK is the first in the Nathan Hawk Murder Mysteries series.

Nathan Hawk, a high ranking police officer, is ‘required to retire’ from the force. That’s a very British way of saying he was sacked. Apparently he broke his commanding officer’s jaw and earned the undying respect of his colleagues. He goes to live in the countryside, just outside London, where he spends the first few months arguing the toss with neighbours and stressing about his grown up children. And wondering what to do with the rest of his life.
What are his options? How about writing his memoirs, or visiting his far flung kids, maybe even standing for the Parish Council? None of those things offers quite the buzz of catching killers, something he was really good at. His tally, when he left the police service, was thirty-four.
Just as he’s about to go mad with boredom a new friend in the village does him the courtesy of getting himself murdered. It’s a tragedy, of course, but for Hawk it’s a lifesaver. And if he can’t catch the killer, no one can…

Author Bio:
I have written literally hundreds of screenplays for television and most recently have been a major contributor to the highly successful Midsomer Murders.
I am also the author of The Nathan Hawk Murder Mysteries, a series of novels which have gained excellent reviews across the board. There are six of them and more to come! The latest is called WHITE CRANE

I’m married with four grown up children, who feature periodically in the Hawk books, heavily disguised. I live in a thatched cottage in the English countryside, a place very like the villages in Midsomer. Without the body count! I work in a log cabin in with two German Shepherds for company. I’m fortunate in that my work is my main hobby, but I also breed orchids and have a collection of bonsai trees.