You are here: Home / Action & Adventure / Gunfighters, Thieves and Lawmen by D.M. McGowan 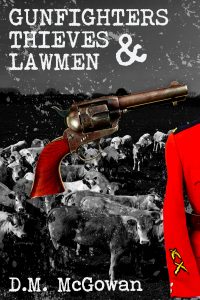 Sully Wheeler doesn’t care why his cattle are disappearing. He doesn’t care why but it has to stop. Perhaps it’s the cost of hiding from his past, but who would steal from a one-time gunfighter?
The NW Mounted Policeman that Sully contacted appeared more intent on stopping vigilante action than in stopping theft. If that proves to be the case, Sully will recover his own property, even if it takes gunfire to do it.
Who is this Mountie, anyway? Is he a cop or something else entirely? Is he working to support the crown, leave the crown or actually do something for the settlers?
And while we’re talking about that Mountie, isn’t he spending too much time with that newspaper lady?

Author Bio:
David Milton McGowan (D. M. McGowan) is a novelist who occasionally writes rhymes and songs. His stories generally contain Canadian themes since he believes his birth-land doesn’t receive the recognition it deserves for its contribution to the world. In addition the neighbors often receive denunciations that could be equally applied to Canada despite a benevolent reputation and only acceptance of that history might precipitate change.
He has been a cowboy, forest fire fighter, heavy equipment operator, farmhand, gardener, road musician and businessman. He has many years’ experience in the welding/fabrication industries and as a commercial driver. He has lived in several areas in British Columbia, Alberta and Ontario and played music in much of North America. He and Karen are the proud seniors to four children, eight grand-children and two great grand-children
Dave has several published novels, both digital and print, is presently expanding his recorded or audible offerings (narrated by the author) and several short stories some available separately and some compiled in collections. Most work, even a few contemporary shorts can be classified as Western Fiction or Historical Fiction and will include Adventure, Mystery and the building of the Canadian West.
Freemason and Shriner