You are here: Home / Books To Read / Grayer than Grey — A love story 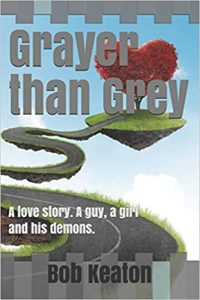 About Grayer than Grey — A love story:

A guy. A girl. And his demons

Haunted by his past and what he has to do to control his demons, Scott never lets anyone get close to him. What if they found out about the fire and what his cousins did afterward?

He’s never been in love. Never even spent the night with a girl after having sex. Then he meets Abby, and it’s like she casts a spell over him. A spell he can’t break, and maybe doesn’t want to. Is this love, he wonders?

To buy time while he tries to decide, he takes a job in South Florida as an entertainment writer for a newspaper. Despite the excitement of the new job, which has him interviewing celebrities and jetting off to New York, Las Vegas and Hollywood, he can’t stop thinking about Abby.

He invites her to come down for a visit, and they decide to continue their long-distance affair while she is finishing grad school. Meanwhile, Scott weighs the options of how to handle the new feelings he’s experiencing.

Can he conquer his demons and have a successful relationship with Abby? Does he want to try? It won’t be easy. And will Abby wait for him while he tries or go back to an old boyfriend?

Author Bio:
Back in college I dropped out of a creative writing course because the professor was so critical of my work. Instead, I’ve had a successful career in journalism. I’ve covered entertainment and politics for newspapers and magazines.

I few years ago I decided I wanted to prove I could be successful at creative writing, too. I’ve written four novels, three of which have already been published.

Where do I get ideas for my writing? When I’m exercising at the gym or in the shower. Maybe that gets the blood flowing to my brain? I have to work an idea or scene through my head before I sit down at the computer. Best advice I’ve ever been given? Trust your readers.

Having worked for three daily newspapers, I tended to provide all the facts, explain everything, leaving nothing to the reader’s imagination. Learning to back off and not reveal everything quickly has been a challenge.

I recently lost my 17-year-old dog, a doxie, my chief editor, which I’m still getting over, and writing helps with that, though I miss his editorial input.