You are here: Home / Books To Read / Game Theory by Gail Daley 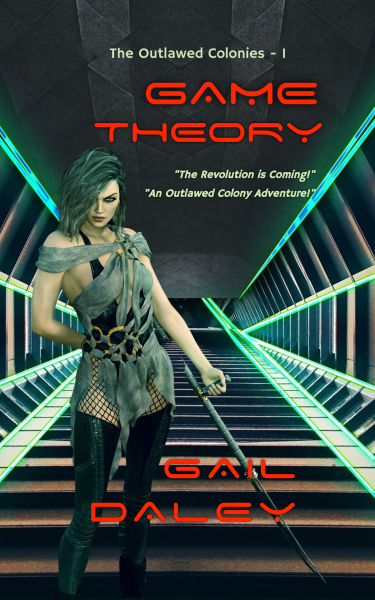 “The Revolution is Coming!”
“An Outlawed Colony Thriller!”

Newlyweds on a distant colony are thrust into a mutiny. Can Mathias and Ivette stop a colony uprising and still keep their newly adopted children safe?

Mathias and Ivette were sent to earth to learn about Portal Technology. When they brought back the codes to reach the other outlawed colonies, their bosses were ecstatic. Now Arcadia could develop trade directly with other Outlawed Colonies instead of using the dangerous Portal on Earth and risking exposure to Earth’s Draconian Governments and Industrial Giants.
While their families were glad they had returned, a few members weren’t elated to learn the pair had adopted seven cloned toddlers. Not all the colonists are happy with Arcadia’s status quo either, and a rebellion is brewing. Mathias is horrified to discover his older brother is in league with the rebels. Does he betray his brother to save his family and his colony?

The rebels are furious when Mathias and Ivette move into the house she inherited from her grandmother. They have other plans for Ivette’s property, and having her, Mathias, and their new family move in isn’t part of those plans. When their home is invaded by the rebel army, Mathias and Ivette must not only protect their new children but defeat the conspirator’s as well.

A writer of Fantasy and Science Fiction stories, Gail has received high praise for her beautifully interlaced, imaginative worlds. She populates her universes with vital and interesting characters, skillfully intertwining their everyday lives with world changing events.
An omnivorous reader, she was inspired by her son, also a writer, to finish some of the incomplete novels she had begun over the years. She is heavily involved in local art groups and fills her time reading, writing, painting in acrylics, and spending time with her husband of 46 plus years.
Gail has a background in business and used this expertise to develop a series of pamphlets (lumped together under the title “The Modern Artist’s Handbook) advising artists and authors about how to improve their bottom line by applying business practices to the development and sale of their work.
Currently her family is owned by two cats, a mischievous young cat called Mab (after the fairy queen of air and darkness) and a mellow Gray Princess named Moonstone. In the past, the family shared their home with many dogs, cats and a Guinea Pig, all of whom have passed over the rainbow bridge. A recent major surgery on her stomach, a bout with breast cancer, and arthritis in her hands have slowed her down a little, but she continues to write and paint.