You are here: Home / Books To Read / Frostburg Burning by James Rada, Jr. 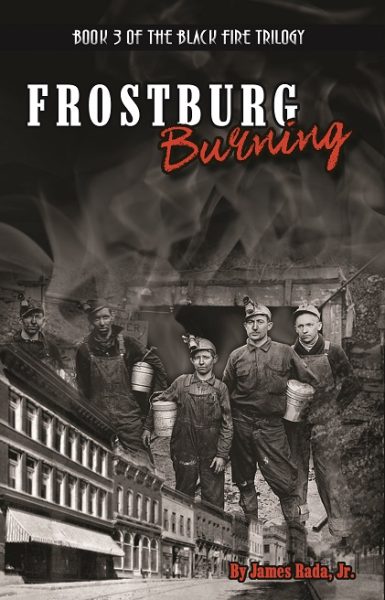 Between strike violence and a bootlegging war, no one is safe in Western Maryland.

Western Marylanders are anticipating a short visit from President Harding during the summer of 1922. While the local movers and shakers want to impress the President, Matt Ansaro discovers a coal miners’ union plot against the President. Matt sets about trying to disrupt the plot while maintaining his undercover identity as a coal miner.

The fallout from David Lakehurst’s time in Western Maryland continues. Before he fled the area, Lakehurst wrote a letter to the area union organizer, outing Matt as an undercover Pinkerton agent. Now, the union is trying to turn Matt into a double agent, so they avoid the law and strike the hardest against the coal mining companies.

Enos Ansaro is enjoying his time making moonshine deliveries because he loves driving. However, as the price of moonshine escalates, more people are looking to cash in on the profits. Some of them are dangerous, and the area verges on the brink of a bootlegging war while the strike violence continues.

The area is a tinderbox waiting for something to ignite it. That might be the kidnapping of Samantha Havencroft. She is Matt’s girlfriend and the daughter of the state college president. The bootlegging war has brought in federal agents looking to shut down operations, but the kidnapping will bring in the state authorities, too.

James Rada, Jr. is an Amazon.com bestselling author of historical fiction and non-fiction history. They include the popular books Strike the Fuse, Canawlers, and Battlefield Angels: The Daughters of Charity Work as Civil War Nurses.
He lives in Gettysburg, Pa., where he works as a freelance writer. James has received numerous awards from the Maryland-Delaware-DC Press Association, Associated Press, Maryland State Teachers Association, Society of Professional Journalists, and Community Newspapers Holdings, Inc. for his newspaper writing.