You are here: Home / Books To Read / Foxwood 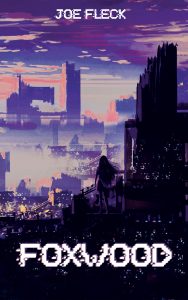 In an alternate future, fourteen-year-old Victoria has lived in a bunker for all her life, convinced that beyond the metal walls of her home is a mysterious “Nowhere.” When she escapes, she is thrown into the futuristic city of Foxwood, rebuilt over Seattle after a catastrophic earthquake. Victoria was never supposed to leave her bunker and isn’t in the Network. Without a Network Chip implanted in her head, Victoria has no identity, an no place in Foxwood. Despite lacking social skills or street smarts, she gets a job at a massive 3D printing business. This company is targeted by a terrorist team of humanoid machines that are indistinguishable from ordinary humans. In an effort to prove her worth as a bunker child, Victoria attempts to expose an infiltrator before the terrorists get a chance to attack. On top of that, the education system controls overpopulation by killing the least intelligent people with a terrifying Birthday Exam.

Author Bio:
Joe Fleck has been writing stories for as long as he’s known how to read. He has been working on professional novels for over eight years, drawing inspiration from Liu Cixin, Philip Pullman, and Haruki Murakami.