You are here: Home / Books To Read / Foxwood Part 2: Weapons 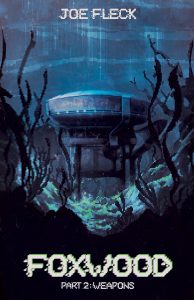 In a strange and futuristic city, Victoria has escaped from her bunker and been thrust into a world where she will never truly belong. With the future of The Company in question, Victoria discovers that she has been targeted by The Machine, a terrorist team of humanoid robots.

Victoria’s challenges are far from simple. Her job producing 3D printed machinery is sabotaged and upended by a critical government, and her days are spent anxiously studying for a deadly Birthday Exam. And of course, her life in isolation has kept her socially clueless.

The leader of The Machine, an enigmatic robot named R, has taken an interest in Victoria, intending to use her for unknown purposes. Because members of The Machine are indistinguishable from ordinary human beings, Victoria can never be certain who she can trust.

Author Bio:
Joe Fleck has been writing stories for as long as he’s known how to read. He has been working on professional novels for over eight years, drawing inspiration from Agatha Christie, Liu Cixin, J. K. Rowling, and Philip Pullman.