You are here: Home / Books To Read / Fortune’s Folly by Cat Dubie 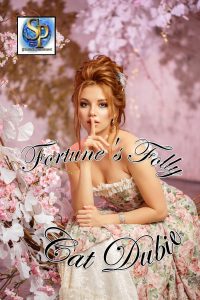 About Fortune’s Folly by Cat Dubie:

In 1854 EDEN FITZGERALD, a brave, bold sprite of seven, witnesses her mother’s death, then along with an English boy, ALEX BANNING, embarks on a harrowing kidnap-and-escape adventure. Twelve years later Eden and Alex meet again in the British province of Prince Edward Island. It seems a chance encounter but he’s there by design–as an agent [albeit reluctant] in Her Majesty’s Secret Service he is investigating her family’s connection with the Irish Republican Brotherhood.

Passionately attracted to each other, Eden and Alex have a brief, torrid romance. When her father and brother are imprisoned for smuggling for the IRB, Eden feels Alex betrayed her family, and her love for him sours. Alex, though beguiled by Eden, believes she is herself involved in the crimes and, disgusted with how his assignment turned out, leaves on another job.

Desperate to have her father and brother freed, Eden, pregnant with Alex’s child, agrees to a marriage of convenience with ANDRÉ FONTAINE, a young French Canadian from a wealthy, influential family. He promises his family will ensure her father and brother are released. In exchange he wants to claim her child as his own, thus satisfying his family, and continue his pursuit of another woman.

Eden’s life in the exciting city of Montreal would be satisfying were it not for her brother-in-law LOUIS FONTAINE, a man used to controlling the lives of his family. Eden, outspoken, independent, a budding feminist, brings him aggravation and, as he perceives it, shame to the proud family name. After she gives birth to twin sons, he remains suspicious of her motive in marrying his brother.

When her brother is released but her father sentenced to life in prison, Eden learns that for the right amount she can hire people to arrange her father’s escape. Just as Louis learns some of her secrets, she learns of his plan to transport illegally-obtained money and finds a way to rob him. Needing yet more money, she dons a mask, carries a pistol, and becomes highway robber separating the wealthy from their money and jewelry. Louis discovers the twins are not André’s and threatens to expose Eden. Needing to buy time, and his silence, she takes Louis as a lover.

With enough money to pay for her father’s escape, Eden sees the realization of all her dangerous labors. Her father is free and they have a short, tearful reunion before his saviors whisk him to New York. And just in time, for her crimes are catching up to her. Louis is becoming alarmingly obsessive, there are police and secret agents after her, as well as a smuggler she once double-crossed. Her clever masquerade comes to a crashing, near-deadly end. Suddenly she, her husband and children must flee when André is accused of murdering his mistress’ husband. Before they are completely safe, however, André is killed by a mysterious horseman.

At the same time Eden thinks of Alex, but not with the romantic notions she once had. She shakes off her memories and prepares to proceed with her sons into the vast wilderness of the Northwest Territories, determined to find her fortune.

Author Bio:
I was born in Austria, immigrated to Canada when I was four, grew up on the prairies, and now live in the beautiful province of British Columbia.

I’ve written creatively since forever, it seems. Poems, short stories, novels, reviews, essays, even the odd letter to the editor. My day job as a technical writer for various levels of government was the labor I did for a living so that in my free time I could indulge in my labor of love, writing fiction.