You are here: Home / Books To Read / Foolish Riot by Karen Renee 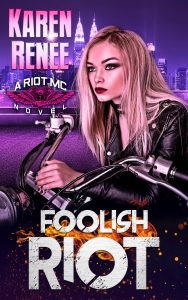 Patricka “Trixie” Baker grew up being used and abused. The night she met her “knight in a leather cut,” she dedicated herself to infiltrating his life. For ten years, all she’s wanted is to be Roll’s property more than anything. Anything. She’s a fixture in the Riot MC, but not part of the family. She never cared what anyone thought of her, but she refuses to be anyone’s fool. With determination to change, and Roll’s inability to commit, she won’t waste any more of her youth on him.

Homer “Roll” Rolland has two secrets; one he knows will hold Trixie back and limit her life. He’s wanted her in his bed since the first time he laid eyes on her, but holding her back is the last thing he wants to do to the woman he loves. When his other secret leads to Trixie being brutally attacked by a rival MC, Roll is forced to make a decision.

Trixie wants to be Roll’s property. Roll’s secrets hold him back from her. Will they find a way to stay together?

Author Bio:
Karen Renee is an award winning author of the Riot MC series and the Beta series. She has been writing since she was a teen, but has only recently brought her dream to life. Karen spent years working in the wonderful world of advertising, banking, and local television media research. She is a proud wife and mother, and a Jacksonville native. When she’s not at the soccer field or cooking, you can find her at her local library, the grocery store, in her car jamming out to some tunes, or hibernating while she writes and/or reads books.