You are here: Home / Action & Adventure / Flight of the Wren 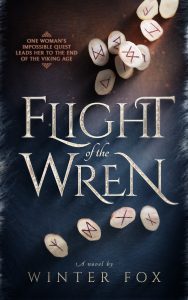 About Flight of the Wren:

“An impressive and intricate novel that’s rich in character and full of action.” (Kirkus Reviews)

A Booklife Editor’s Pick: “Fox (the Grace Coffin series) enchants with his first Viking Age novel, a sweeping medieval saga that stretches across 11th-century Scandinavia… This exquisitely wrought medieval tale will appeal to fans of both fantasy and historical epics.”

In 1002 AD, a young shaman’s apprentice returns home to find that Norsemen have razed her village. Hilja begins an impossible quest to redeem her tribe and must use all her courage and craft to survive.

From the four corners of Scandinavia, Flight of the Wren weaves history with battles, magic, intrigue and romance, sweeping the reader on a collision course with the end of an age. A broad and lavish saga that spans five novels and thirty years, we follow several threads that weave across the weft of history, filled out by the weave of mystory.

In this first novel of the series, we witness the origins of Olav Haraldsson and the apprenticeship of Canute the Great under Thorkell. We meet the crafty Witch of Vestfold and her children, and watch as she shapes the future with her seidr magic.

Thorkell’s crew fights against vengeful Russians, as he sails to Uppsala to steal magical rune tiles for his wife, and all along, Hilja, our heroine, travels across the breadth of Scandinavia with her companion, ‘The Cursed Boy’ in search of her lost tribe.

A book with a huge heart, epic battles, and young heroes coming of age at the cusp of an era.

Author Bio:
When I was ten, I built my own bed on stilts so I could have a reading nook underneath, where I spent many late nights, up past my bedtime. I read two or three books a week, not including schoolwork. I also was an avid D&D player, martial arts student, and cross-country runner. Many years later, my hobbies include hiking, boating, Scrabble, cooking, and gardening. I am fortunate enough to live on Mount Desert Island with my spouse, two cats, and a doodle.

I publish under a pseudonym because I live in a small town on a small island and everyone knows everyone else’s business here. Winter Fox is also easier to spell.

I have been working on the “Flight of the Wren” series since 2013, when I began researching the history of the Viking Age. I plan on releasing two novels in the series every year until it is complete, likely 5 books in all, at the end of the era.

The Grace Coffin series were my first published novels, born out of the #Metoo movement. It features Grace, a troubled teen trying to finish high school, and me, the dead guy.
In case you were wondering, I don’t lie awake worried about the existence of Undead creatures; I worry about how they entertain themselves, and where they get their online shopping delivered.

My first book, GRACE COFFIN AND THE BADLY-SEWN CORPSE takes place right in my hometown, Southwest Harbor, right on the edge of Acadia National Park. The scenery here is to die for and it remains a daily inspiration.

I love to write and the long Maine winters provide an excellent opportunity for real, live ‘woodshedding.’ It is only recently that I’ve begun writing full-time. Please visit my web page to see more personal information.