You are here: Home / Books To Read / Flavour with Benefits: France 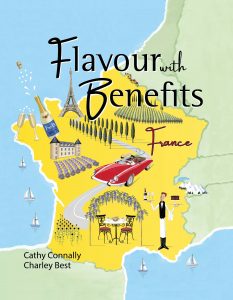 About Flavour with Benefits: France:

Would you love to escape on a romantic journey? Your ticket is between the covers of the stunning Flavour with Benefits: France. …. Ooh la la! ….

Discover the world’s most popular travel destination:
* Experience breathtaking France with over 100 original photographs.
* Sail by limestone cliffs on a warm Mediterranean current.
* Descend a glowing staircase to a wine cave filled with millions of bottles of champagne.

Learn about women who changed the world:
* The Grande Dame of Champagne who couldn’t vote yet built an empire.
* La mère (the mother) Brazier whose restaurants set new culinary standards.

Food that doesn’t compromise flavour or health:
* Enjoy 50+ inspired recipes accompanied by stunning photographs.
* Learn about food as medicine and a five-year-old girl.
* Crave a dessert that reimagines: I’ll have what she’s having!

Flavour with Benefits: France will inspire you to plan the trip of your dreams and indulge in
flavours that deliver a pleasant surprise.

Co-authors, Cathy Connally and Charley Best, are obsessed with developing new approaches to iconic flavours served with a side-dish of travel. Flavour with Benefits: France is the first book in the series.

Author Bio:
Cathy Connally’s culinary career had an inauspicious start at nine years old, with the renovation of her mother’s kitchen involving the Yellow Springs, Ohio fire department. Later, to the horror of a high school teacher in St. Peter, Minnesota, she would win a Betty Crocker Award, only because she was good at math. This vote of confidence would propel her into internal audit in the global mining sector and eventually to a career as an entrepreneur in technology. Eating countless takeout meals while driving hours to put out project “fires,” was leading to a slow train wreck on the health front. She recalled a lesson she had learned at five years old about food as medicine. This led to the birth of “Flavour with Benefits,” the pursuit of flavour that doesn’t compromise on health. Cathy also loves adding a side dish of travel to her life, which has included sixty countries. Relaxation involves cooking and baking and spending time with family.
Charley Best decided after decades lounging as an entrepreneur, he would
use his weekends and meditation time and add author to his list of hobbies.
Overestimating his writing capabilities, this is his first completed project
in years. His co-author, Cathy Connally, has given him a lot to chew on
and now he is not only a believer in the positive effects of the Flavour with
Benefits approach to nutrition and the enjoyment of delicious food, but he’s
also developed a stand-up comedy routine about the benefits. He loves
hummingbirds and spends many hopeful hours by a window with a camera,
willing the snow to melt and pining for the birds to return. He prefers the
dainty photogenic female birds. The male birds are narcissistic, camera-shy,
nectar-hogs, but admittedly their courtship acrobatics are spectacular.