You are here: Home / Books To Read / First Dog on Earth by Irv Weinberg 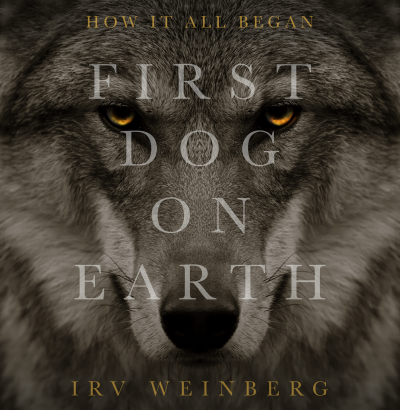 At the dawn of civilization, a wolf dog befriends an old hunter and revives his alpha powers among his human tribe. Together with the animal’s pack, they discover a new way of life—a shared odyssey of survival and trust that grows into the most successful partnership the Earth has ever known, changing dogs and humans forever.

The pack led by Oohma encounters the first humans they have ever seen—Ish the old hunter, Lut the gifted young medicine woman and Hun the brutal tribe leader whose jealousy forces him out of the tribe.

This is the poetic story of how civilization progresses all because of the abilities the dogs bring the tribe. Set against the ancient Chauvet Cave in France with its remarkable cave art and the footprints of a small boy and his dog as they walk together side by side as companions not prey.

How does the greatest love story in history begin? With a leap into the unknown, as told in First Dog on Earth.

Irv has won every major award in the advertising industry, notably the Gold Lion at Venice, The One Show in New York, and the Best 100 Commercials of all time, to name but three. His Dr. Pepper campaign is in the permanent collection of the Advertising Hall of Fame.

He is best known for creating The Magic of Macy’s; For the Seafood Lover in You (Red Lobster); America’s Most Misunderstood Soft Drink (Dr. Pepper); Just for the Taste of It (Diet Coke); and similarly iconic ad campaigns for British Airways, Continental Airlines, and many more from start-ups to Fortune 100 companies.

As an entrepreneur, Irv co-founded Poochi, the world’s first pet fashion company and the force behind America’s “dress your pet” craze, now a global phenomenon.

His just-completed novel First Dog on Earth is the story of the first wolf to cross over, leave its pack behind, and join the family of man.