You are here: Home / Books To Read / Fire And Desire by KELLI CALLAHAN 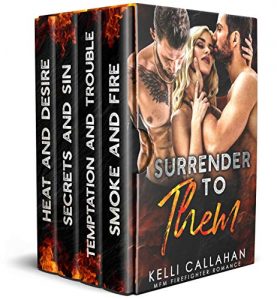 Fire And Desire by KELLI CALLAHAN

This anthology will light a fire that burns all night long…

Get four books from Kelli Callahan’s bestselling Surrender to Them series!

These books have been revised, expanded, and come with new extended epilogues that are only available in this anthology!

Quiver & Burn: Brylee moves next door to a hot-as-sin, Alpha AF firefighter but literally has to do a double take when she realizes he has a twin brother who is equally tempting. When things start to fall apart in her life, they are the ones that save her, but that presents her with an interesting dilemma. She likes both of them! Brylee is feeling the heat, but can she stay out of the fire? What if she doesn’t want to?

Arson & Ache: Marissa’s boss sends her to a charity auction with strict instructions to bid on a date with one of the gorgeous firefighters from the Heated Hunks calendar. Due to a mishap with a rival from another company, Marissa ends up winning two auctions instead of one. When her boss decides she’s too busy to actually go on a date with either one of them, Marissa is left in an interesting predicament. She has to go on a date with both of them. Things get a little complicated when an arsonist begins targeting people close to her, and her new friends may be the only ones who can keep her safe, especially when she realizes the man behind the mask may be someone she knows…

Sizzle & Share: Eliza left the two she grew up in with a broken heart after being betrayed by the Anderson brothers. Five years later, she’s forced to return for her best friend’s wedding, and walks right into her worst nightmare. She swore they would never touch her again, but a lot has changed in five years, and they want a second chance. As the lies from the past begin to unravel, Eliza realizes that leaving may have been a mistake, but what if she’s faced with the same choice again? What if she has to choose?

Blaze & Bind: Rachel’s brother leaves town and she’s forced to clean up his mess, which includes terminating his lease, except there’s a problem. Her brother has two roommates who aren’t eager to leave. Rachel decides to personally evict them, but when the door opens, she sees Liam, her high school crush. She barely gets a chance to compose herself before she finds out that her brother’s other roommate is Gerard, the guy who took her innocence and broke her heart. One of them wants a second chance and the other wants to do what he should have done in high school. Feelings, emotions, and angst lead the three of them down a very interesting path…

Buy the book, and follow the author on social media:
Get This Romance Box Set From Amazon.

Author Bio:
Kelli writes hot and steamy romances with delicious alpha males who will not stop until they get the women they crave exactly where they want them. Kelli’s heroes are tough as nails, hot as sin, and underneath the rough exterior is a heart of gold begging to be unleashed. If you think you can tame them, you’re probably right, but it won’t be an easy journey.

Make no mistake, Kelli’s stories will give you the happily ever after you need, but they’re also steamy and packed from cover to cover with exactly what you’re looking for late at night when you leave your panties by the door.