You are here: Home / Books To Read / Evergreen Forevermore by T. A. Cline 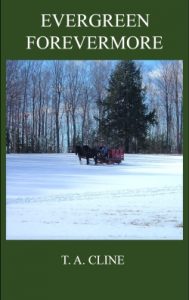 About Evergreen Forevermore by T. A. Cline:

John Devore has graduated and is now a paramedic. He has one day left at the shelter in New York City where he has volunteered before going home to, Whitecap, Vermont, nestled on the shore of Lake Champlain. It will be hard for him to say good-bye to the friends he has made, especially Judge James Wilcox. He encounters a Vietnam vet and persuades him to call home after all the years being away. He also has a run-in with a New York socialite that comes to take pictures of herself with the homeless. She is young and attractive and arrogant, and completely self-centered. John is glad he is going home.
At Whitecap, John begins an emergency unit to serve the town and outlining areas. He crosses paths with sixty-six-year-old Fred Bates, the town handyman. Fred is a loner and rarely starts a conversation with anyone. He lives by himself in a shack outside of town. Fred drops the word triage as John is talking with him. This word starts John on a Quest with the help of the judge and others.
Judge Wilcox calls John and has a difficult favor to ask of him. The judge needs to sentence a young woman to public service for sixty days, and the judge wants her to serve at the e-unit with John. She will stay with Dr. Mary Morgan and her niece, Ali.
John lives with his grandparents on their farm just outside of town. The farm is a festive place, especially over the holidays. With the arrival of the young woman to serve her time in public service, the holidays may never be the same again.
With everyone in place, the stage is set for intrigue, romance, a family coming together under impossible odds through the holiday season. And for one Vietnam vet to mentally and spiritually finally come home.

Author Bio:
T. A. Cline is married with children, grandchildren, and great-grandchildren. He and his wife live the quiet country life after his retirement from farming. His love of storytelling has found its way into books, and his desire is to keep writing for as long as he can as a Christian author. Evergreen Forevermore is his sixth book published and his fourth Christmas story. The holidays are always special days at the Cline home. Especially during the Christmas season. The house is bathed in Christmas splendor. The lights and decorations abound and radiate a warm glow for family and friends.