You are here: Home / Books To Read / Episode by Tracey Morait 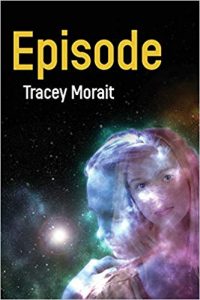 Alisha Dainton has severe epilepsy, so she’s used to having seizures. Sometimes she even has weird visions and hears strange noises. After a particularly bad episode on holiday in Cyprus, what she sees and hears makes her think she’s going mad: who is the beautiful girl with the see-through eyes, multi-coloured hair and rainbow and the half-woman, half-bird creature singing by the hotel pool, and just why has she been chosen to go back in time to ancient Sparta to help save a princess called Helen? Either Ali is having some sort of bizarre dream, or she’s about to have an amazing adventure that might change the entire story of the Trojan War.

Author Bio:
I was born and brought up in Liverpool, England, and moved to Bristol in 1990 where I now live with my husband Keith and cat Treacle. I write and self-publish books for children and teens and Keith designs my book covers.

I like to write about what I know or what interests me. I am a keen football supporter (Liverpool FC is my team) and this inspired me to write Goalden Girl and the sequel Goalden Sky, about Gemma’s quest to start a girls’ football team at her new school. My personal experience with epilepsy led to Epiworld, where Travis discovers his powerful seizures can send him travelling through time, and I used this theme again in my latest book, Episode. This time it’s Ali who’s the time traveller and she is taken back to the days preceding the Trojan War. My interest in ancient history and literature helped to shape the book and I have mercilessly used the gods to help the story along! Before Epiworld came Abbie’s Rival, based loosely on an experience I had with a pen pal, and later came Big Brother, a horror/ghost/scifi vigilante story. My home city of Liverpool features quite widely in my work, but in Big Brother I did allow my character Ash to hail from Bristol!

I am currently working on a seventh book for teens.